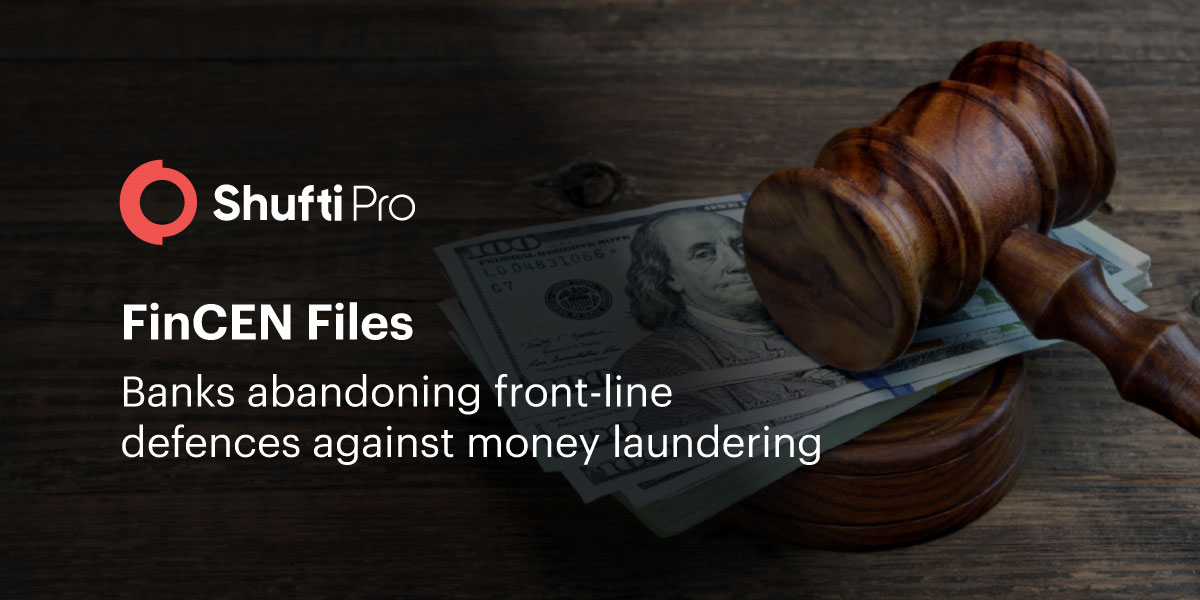 Banks and financial institutions are under the continuous scrutiny of regulatory authorities, yet, some of them are abandoning their roles in deterring money laundering. The leaked documents revealed trillions of dollars of dirty money are being circulated around the globe by the world’s largest banks.

The blog covers detailed insight into the leaked FinCEN Files to highlight the increasing trend of suspicious activity reports (SARs).

Recently, secret US government documents alleged five major banks to defy money laundering rules by moving a large amount of money for criminal networks and shadowy networks. This illicit movement of funds has resulted in turmoil and undermined democracy across the globe. According to the ICIJ report, the leaked records indicate that the five global banks kept benefiting from dangerous players even after being penalised by the US authorities for failure to combat money laundering.

The analysis by ICIJ asserted that big banks continue to move money for the entities they can’t even identify and fail to report the suspicious transactions even for a longer period of time. Is this a negligence of law enforcement agencies or the banks are unable to streamline their processes? The US money laundering law enforcement agencies rarely indict megabanks that are involved in money laundering scandals. In fact, the actions authorities take such as money laundering fines are not enough to wash black money through the international financial system.

The unsupervised cash flow not only helps support criminal organisations but also leads to a destabilized economy. Laundered funds usually flow between the accounts owned by shell companies that are registered in furtive offshore tax havens. It allows the elites and business tycoons to hide massive sums of money from tax authorities and law enforcement agencies.

What is money laundering?

Money laundering is generally known as illegal movement of black money through various tactics, conducted through financial infrastructure. It is conducted in three different stages to manipulate the authorities and present the black money as hard-earned money.

Over 2,100 suspicious activity reports (SARs) comprising more than $2 trillion in transactions were leaked from FinCEN and shared with the international Consortium of Investigative Journalists (ICIJ). Around two weeks ago FinCEN predicted that some media organisations were planning to publish stories regarding the leaked documents. In fact, before this warning, FinCEN was seeking public comments regarding improvement in anti-money laundering system in the US.

Along with examining the FinCEN Files, ICIJ and other media partners collected more than 17,600 other records from different sources including court files, insiders and whistleblowers, freedom-of-information requests and some other resources.

The analysis by ICIJ indicated that banks and financial institutions mentioned in FinCEN Files frequently processed transactions to offshore companies registered in so-called secretive jurisdictions, and that too without knowing the owner of the account. According to ICIJ report,

At least 20% of the FinCEN reports contained a customer having an address of the British Virgin Islands – one of the top-world offshore financial havens.

Apart, many other reports included the addresses in the US, the UK, Hong Kong, Cyprus, Russia, Switzerland, and United Arab Emirates (UAE).

Another key finding of ICIJ includes that in 50% of the reports, the banks didn’t possess any information about the entities behind the transactions. And in 160 reports, even though banks investigated corporate vehicles but got no response.

Everyone is doing badly!

The executive secretary of Paris-based FATF, David Lewis, claimed in his interview with ICIJ that “Everyone is doing badly”. The evaluation reports of FATF (Paris) digged into the performance of government agencies and banks to meet anti-money laundering (AML) laws and regulations. The report highlights a lot of paperwork with little practical progress. Lewis declared that many countries are focusing on the check boxes to look good on papers instead of cracking down the money laundering.

We can’t blame only financial institutions or government agencies, both are equally responsible for the increasing trend of money laundering. Last year, an association of the world’s biggest banks criticised that regulators are more concerned about technical compliance instead rather than knowing if the systems are actually making a difference in combating financial crime.

Penalties are not enough to stop money laundering

FinCEN Files provide prodigious insight into the secret world of international banking, secretive tax havens and financial crimes. These files show banks blindly allowing cash flows for years without even identifying the owner of accounts or the source of funds. The US authorities working to combat money laundering and financial crimes have previously fined banks millions and billions of dollars.

A 16-month investigation by ICIJ demonstrates that these penalties are not enough to stop money laundering. Big banks contiue playing significant role in transferring dirty money associated with corruptions, organised crims, terrorism and fraud. According to FinCEN Files, five giant banks have been named in the investigation – JPMorgan Chase, Standard Chartered, HSBC, Deutsche Bank and Bank of New York Mellon.

These banks have repeatedly violated their promises to show good behavior and deter money laundering, explains the leaked documents.

Back in 2003, the incident of the Jerusalem bus bombing took place. By 2010, a lawsuit against an Arab Bank – Jordanian financial institution – was filed for moving funds that facilitated bankroll terrorists who were involved in bus bombing and other attacks. FinCEN Files uncovered the working relationship of Arab bank with a giant influential bank – Standard Chartered.

Standard Chartered bank supported the Arab Bank clients in accessing the US financial system even after the regulatory authorities found weak money laundering checks in 2015, forcing to halt funds-transfer activities in the US. Moreover, the UK- headquartered banks continued its relationship with the Arab even after the regulatory authorities issued the notice to stop serving the suspects.

In 2012, New York regulators reasoned that Standard Chartered had schemed with Iranian government for more than a decade profiting millions of dollars in fees. As a result, the Us financial system is left vulnerable to corrupt entities, organised criminals and terrorists. This scheme cost Standard Chartered almost 670 million-dollar penalty in the second half of 2012 by New York regulators and US authorities.

Why financial penalties are not enough to change bank’s behavior?

Apart from Standard Chartered Bank, JP Morgan, HSBC, Deutsche bank and other banks represent the similar stories of not changing their behavior in combating money laundering? What can be the reason? These bank cases point out two major things; either the regulatory authorities are not putting enough pressure on the banks or the banks are not affected with these financial penalties.

A financial crime expert, John Cassara, who has previously worked as a special agent of FinCEN, pointed to the later cause. According to him, the financial fines imposed by law enforcement authorities may sound as a huge amount but for banks it’s equal to a little fraction of profit. Moreover, this fine isn’t paid by the bankers but the shareholders.

James S. Henry, a New York-based economist says only if the banks and bankers are held accountable then we can witness some impact on large banks’ behavior in tackling illicit cash-flows. He stated,

“We have to put some senior executives who are in charge of this stuff at risk. And that means fines and/or jail.”