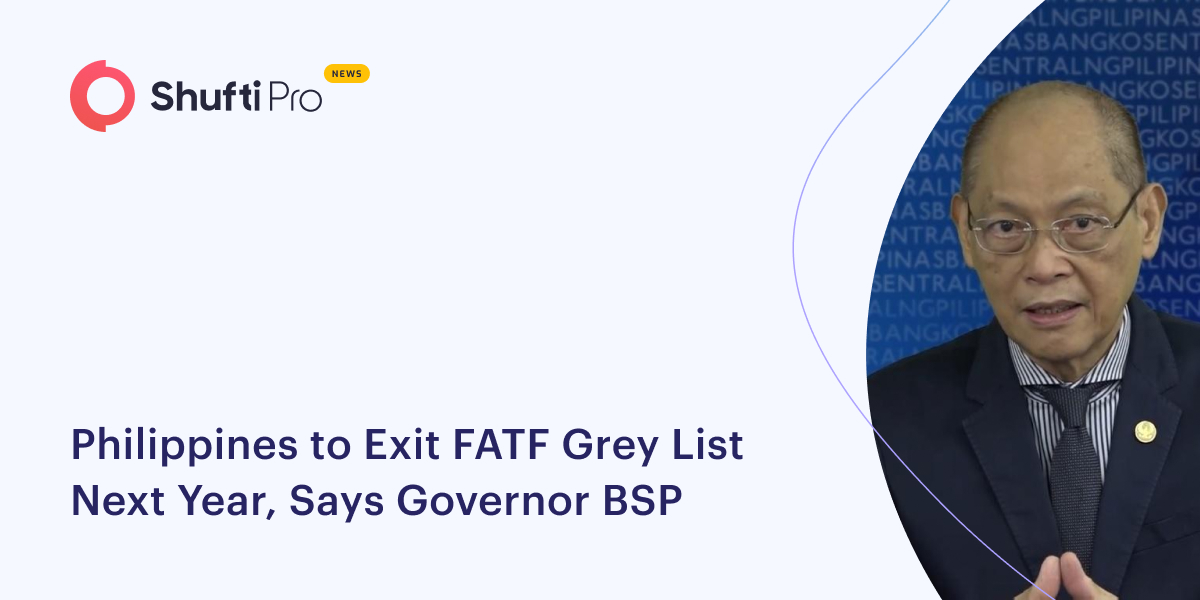 Felipe M. Medalla, the governor of BSP, says that the Philippines have one year to exit the FATF greylist, and the authorities aim to resolve the issues of AML/CFT that landed the country on the watchlist.

According to the Governor BSP (Bangko Sentral ng Pilipinas), Felipe M. Medalla, the Philippines has one year to fix “dirty money” issues that anchored it on the “grey list” of global AML watchdog, Financial Action Task Force (FATF). The original schedule was to be delisted by January 2023.

However, it will take a while particularly if the issue is the enforcement and implementation of AML, TF (Terrorist Financing), & PF (Proliferation Financing) regulations &.

When asked about the removal from the FATF greylist by the end of January 2024, Medella said, “We can’t guarantee. But, we will try our best.”

The BSP has had many discussions with key government agencies such as the Department of Justice to help pinpoint shortcomings in the battle against illicit transactions within the extended time frame.

Medella said they still have twelve months to improve to be delisted from the watchlist. He added, “Solution requires a whole government approach.”

The National AML/CFT (Anti-Money Laundering/Combating Financial Terrorism) coordinating committee or NACC was founded in 2018 for a whole government policy.

Based on the country’s third FUR (Follow-up Report) on MER (Mutual Evaluation Report), the FATF said the country has taken sufficient measures to resolve some of the AML/CFT issues within the agreed time.

“Overall, the Philippines has made good progress in addressing the technical compliance deficiencies identified in its MER,” said FATF in the August 2022 FUR.

In the latest MER, the country is deemed “largely compliant” with 2 of 37 guidance based on 18 action plans necessary to delist the Philippines from the greylist.

FATF, after reviewing the latest MER, stated that the Philippines will stay in the so-called “enhanced follow-up” level and will keep on reporting back to the APG (Asia/Pacific Group) organisations on Money Laundering to monitor the progress and “strengthen its implementation of AML/CFT measures.”

AMLC, the financial intelligence unit of the Philippines, said that the Philippines “must improve its AML/CFT regime” and “removal from such list requires accomplishing the country’s action plan within the prescribed timeline.”

So far, the country has resolved some of its AML/CFT issues and made considerable progress in managing the Technical compliance deficiencies.