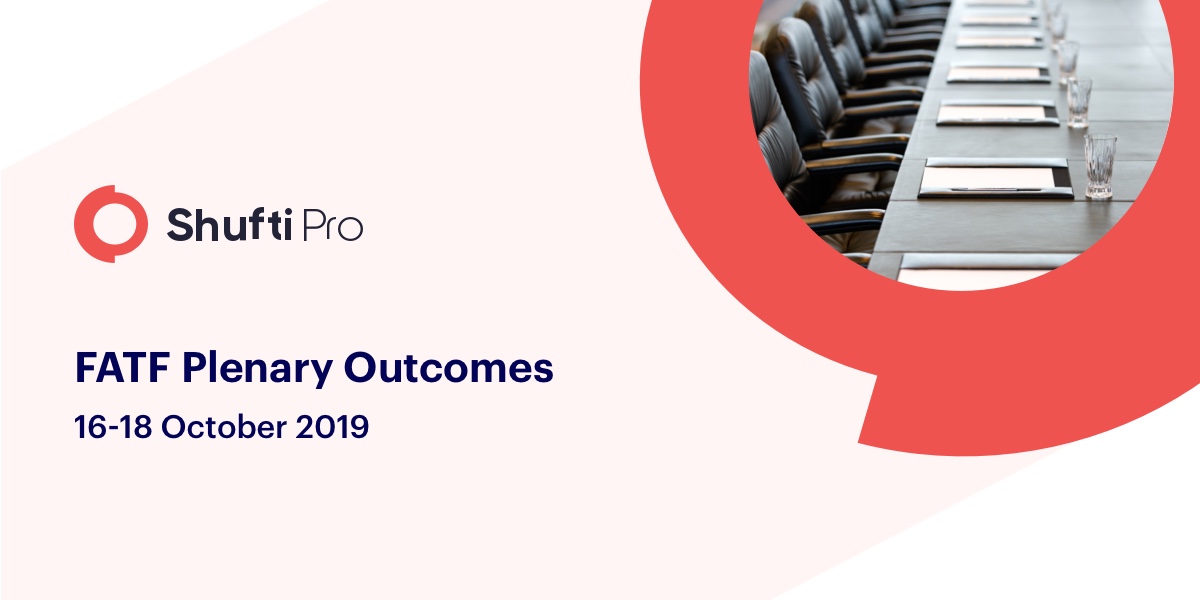 FATF October 2019 Plenary – Here is What You Need to Know

FATF is an inter-governmental body that aims to set standards for effective implementation of the regulatory, legal and operational measures to combat money laundering and terrorist financing. FATF goals for the elimination of any criminal activity that disrupts the flow of the financial system. In the recent meeting, FATF highlights important issues discussed below:

Money laundering and terrorist financing risks with virtual currency, “stablecoins” or similar assets are pondering. FATF focuses on countries and their norms to facilitate the virtual currency industry. According to FATF, it is necessary for the countries to take in place requirements while recognizing the risks associated with virtual assets. This sector should be properly supervised to eliminate the incidences that aid criminal activities. The countries which have already implemented measures should report back regarding the actions they took for evaluation purposes.

It is the duty of FATF to monitor the standards industry is following in its development processes and make sure that they are complying with the requirements defined by FATF. Emerging virtual assets such as “stablecoins” are supposed to introduce to a shift in the virtual currency ecosystem which could be a source to facilitate criminal activities most likely money laundering and terrorist financing. “Stablecoins” service providers are supposed to adhere to FATF standards strictly just like traditional financial service providers do. FATF is continuously monitoring the characteristics and is looking for further specifications these virtual assets hold and to be reported with updates these currencies come up with.

A swift shift towards the digital world, digital payments, and digital identity are worth notable. Every year, a large number of transactions through digital means take place and are growing by 12%. The digital identity roaming over the internet should be identified and verified. This is a vital step to perform as its negligence gives rise to criminal activities. Fake identities over the internet participate in money laundering and terrorist financing. This can be eliminated through customer identification to make sure that each person has its own real identity.

FATF is going to release a draft for public consultation elaborating on the use of digital identity. The draft would give clear statements regarding the use, reliability, and standards of digital identification systems. FATF aims to eliminate the sources that are facilitating criminal activities.

Mutual Evaluation of the Russian Federation and Turkey

FATF plenary conducted a mutual evaluation of the Russian Federation and Turkey. It evaluated the effectiveness of AML/CFT compliance in both countries. Also, their compliance level with FATF requirements.

In Russia, the FATF-EAG-MONEYVAL assessment was conducted whch showed that Russia has an in-depth understanding of the criminal activities and risks associated with them. It follows robust policies to combat risks of financial crimes like terrorist financing. However, it needs to work on the supervision standards of money laundering especilaly the money that is laundered abroad.

In Turkey, plenary concluded that measures Turkey is taking in place to cater to money laundering and terrorist financing activities are stringent. However, it is in dire need of persuing financial crimes in line with the risk profile of the country. Also, there should be strict actions immediately to freeze the criminal liability at the spot which includes any detection of terrorist financing or money laundering or even weapon proliferation of the purpose of mass destruction.

Plenary discussed AML/CFT regulations compliance of each country. After evaluation of both countries’ compliance with FATF requirements, mutual evaluation reports will officially publish in December 2019.

Since the mutual evaluations conducted in 2014, plenary discussed changes Norway and Spain entertained at their ends regarding money laundering and terrorist financing activities.

Norway is on the go to strengthen its strategies for financial intelligence to understand the bad money flow through money laundering and terrorist financing, it has developed effective strategies to combat the risks of dirty money flow. Its improvements towards the ability to freeze suspicious criminal liabilities are also effective.

Similarly, Spain is also active in ensuring the sources that facilitate criminal activities and measures they are taking to combat them. It has established an effective framework and mechanism to freeze the weapons proliferation supposed for mass destruction.

FATF plenary re-rated these countries on the basis of mutual evaluation. It came out that among these, Ireland moved to regular follow-up procedures from enhanced processes. FATF will be publishing the mutual evaluation report soon declaring fluctuations in technical compliances. Also, the rating with respect to measures taken to eliminate terrorist financing, money laundering and ability of weapon freezing having mass destruction intentions.

In the report of 2016, FATF conveyed concerns about Brazil’s continued failure with technical compliances to deter the risks of money laundering and terrorist financing. FATF declared that this would be the primary concern in the October FATF plenary. Now, evaluation resulted in positive results depicting the effective adoption of regulatory compliance by Brazil. Its substantial progress has proved to address most of the compliance requirements for the betterment of the financial system.

However, serious concerns remain regarding the international compliance standards of Brazil. This emerged as a result of limitation laid by a provisional injunction that was issued by a Brazilian Supreme Court judge. This limitation was on the use of financial intelligence for criminal investigations. FATF is active to get timely updates regarding this matter.

FATF concerned the identification of Juridictions with respect to strategies that they are taking in place for the elimination of terrorist financing and money laundering. FATF maintains public documents of June 2019 containing lists of jurisdictions that might pose potential risks to the international financial system. These contain amendments regarding the call for action and an action plan with FATF.

Ethiopia, Srilanka, and Tunisia with no Jurisdiction monitoring

FATF is satisfied with the progress of Ethiopia, Srilanka, and Tunisia in addressing AML/CFT deficiencies. Now, these jurisdictions are out of the list of FATF monitoring.

The FATF praised Ethiopia, Sri Lanka and Tunisia for the significant progress made in addressing the strategic AML/CFT deficiencies identified earlier by the FATF and included in their respective action plans.

These jurisdictions will not be subject to the FATF’s monitoring any long under its on-going global AML/CFT compliance process and will work with the FATF-Style Regional Body of which they are a member and continue to encourage their AML/CFT regimes.

FATF identified serious deficiencies in AML/CFT compliance programs of Iceland, Mongolia, and Zimbabwe. Each jurisdiction now has developed an action plan to comply with FATF requirements and FATF is looking forward to their plan.

Since Pakistan committed to making high-level progress in June 2018 in regard to the requirements of FATF and APG, Pakistan has improved the AML/CFT regime’s compliance. However still, the progress is not up to the mark. Pakistan still lacks a proper understanding of terrorist financing risks. It is able to complete five out of 27 action plans. FATF urges Pakistan to complete the thorough action plan by February 2020. In case of any discrepancy, FATF will take action. This action could be a serious call to all jurisdictions to give special attention to the relationship with Pakistan’s financial institutions.

In June 2018, Iran committed with FATF regarding effective practices with respect to AML/CFT strategies to overcome the current deficiency and to act upon the implementation of the Action Plan. Iran significantly lacks proper identification of terrorist financing risks. FATF calls upon its members in June 2019 to conduct the supervisory examination in Iran’s subsidiaries and branches of financial institutions. Now if before the deadline i.e February 2020, Iran does not act upon the conventions of terrorist financing and Palermo, FATF will call for members and subject Iran with effective countermeasures.

Iran will be in FATF public statements till it fully comes up with with the Action Plan. Until Iran takes a serious approach towards the implementation of countermeasures to eliminate terrorist financing, FATF will be highly concerned with the risks that can arise from Iran regions and pose this threat to the international financial system.

In the plenary of FATF, one the major discussion involve identification of improvements that can better help in the supervision of AML/CFT regimes. FATF discussed the program and aims to outreach to improved strategies to national supervisors. The objective behind this effort is to let entities regulate their processes and focus more on the outcomes while taking in place a risk-based approach.

FATF focuses on the transparency of beneficial owners of the legal sector. It is important to prevent terrorist financing and money laundering through companies. However, jurisdictions find it challenging to implement the requirements in this field. Although mutual evaluations using a prolonged approach opens the ways for effective solutions. The collection of information through several sources contributes to effective approach towards the prevention of misuse of the legal sector. Facilitation of criminal activity through legal persons can be avoided. A large number of sources help in better addressing of problems and identifying their respective solutions. Using input from global databases can help in catering to criminal activities in a better way.