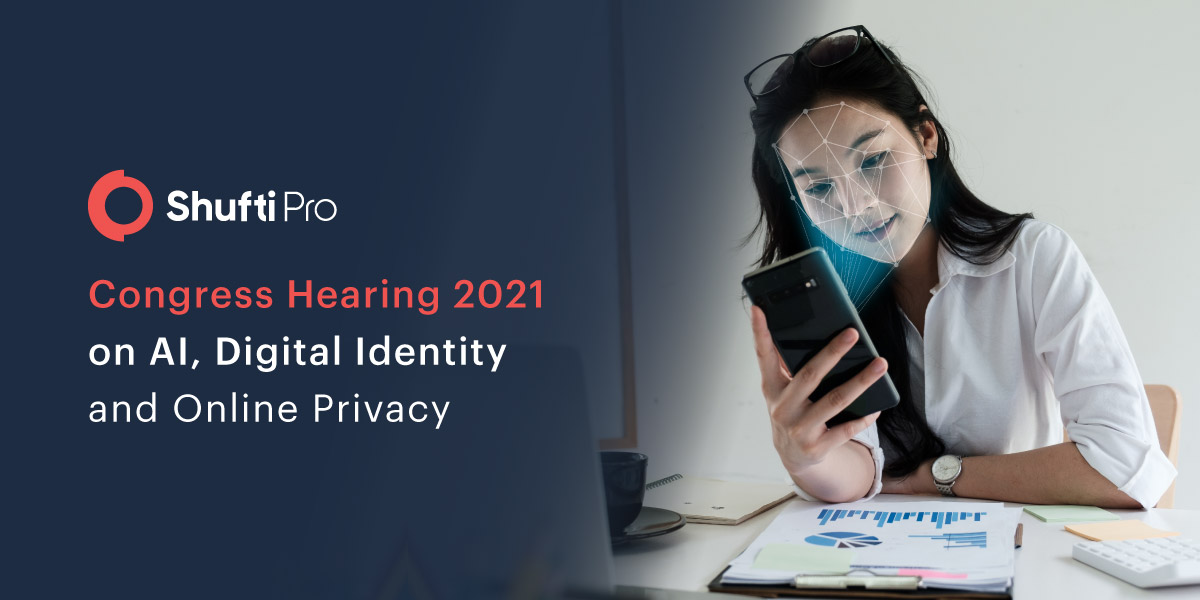 On 16 July 2021, the US Financial Services Task Force on Artificial Intelligence held a virtual hearing entitled: “I Am Who I Say I Am: Verifying Identity while Preserving Privacy in the Digital Age”. The hearing, hosted by Congressman Bill Foster, aimed to gain insights from industry experts on the future of digital identity, how to better secure customer data and digital privacy, making artificial intelligence more inclusive and diverse, and the use of technologies.

Speakers at the hearing included experts in the field of digital technology and security. Victor Fredung, the CEO of Shufti Pro, was also invited to give his testimony. Before we dive deeper into the key takeaways from this hearing, it is essential to understand the difference between digital privacy and digital security.

What’s the Difference Between Digital Privacy and Digital Security?

Privacy refers to the rights an individual has on their personal information and on how it’s used. Think about the privacy policy guidelines you agree to when downloading new apps online. On the other hand, security refers to how that information is protected once it has been collected.

Let’s take a look at the key areas of concern when it comes to online privacy and security.

Online data has become the most valued asset for the modern-day economy. This is because the collection of customer data allows companies to target a market niche, provide customized services, advertise products according to demographics, analyse future demands, and much more. On the flip side, it’s a major asset for criminals as well. As mentioned by Congressman Bill Foster in the hearing, the FTC received 1.3 million complaints regarding identity theft from US citizens in 2020 alone. Once cybercriminals have stolen sensitive data, they can use it to their advantage. This can damage the victim’s credit score, ruin loan history, drain their bank account, or even get them wrongfully arrested.

“Digital identity verification is a long overdue and necessary tool for the United States economy to transition into the digital age”, stated Foster, and added how this tool powered by AI technology can prevent such frauds while protecting privacy. “Digital identity will provide Americans with a way to prove who they are online in a secure manner”. He further stated that digital identity can be used to sign up for government benefits, withdraw cash from banks, and even view medical records online, with the risk of identity theft approaching zero.

Suggested Read: 5 types of identity theft fraud and How businesses can prevent it?

2- Influence of the Pandemic

While the healthcare sector was the prime target of the COVID-19 pandemic, other industries were impacted as well. The Congress hearing highlighted that as most transactions shifted online, digital platforms became a lucrative target for criminals. “More than $63 billion was stolen from state unemployment insurance programs by cybersecurity criminals according to the Labour Department”, revealed Jeremy Grant, the Coordinator of the Better Identity Coalition. “The problem has magnified over the last 18 months … ID theft losses soared by 42% just last year, and hackers have caught up with most of the first generation tools we use”. The pandemic unveiled inadequacies in the existing digital identity infrastructure, enabling cybercriminals to steal billions of dollars and creating major barriers for legitimate Americans that tried to access critical benefits and services. According to Grant, the US government needs to play the lead role in defending the future of digital identity.

The CEO and Co-founder of Shufti Pro, Victor Fredung, highlighted another key area of concern at the virtual hearing – the verification of online identities. As mentioned by Grant, conventional tools are no longer sufficient to minimise the threat of today’s tech-savvy criminals. Fredung stated that due to such crimes, “it is the end-users that get compromised, but there are different ways of solving this”. Victor further shed the light on the difficulties customers face when asked to verify their identities. He stated that the problem arises due to vast variations in ID document types and regulatory requirements across the country.

Here’s how Fredung believes the above-mentioned obstacles can be effectively tackled.

1- AI-backed technologies have proven to be the best alternatives to traditional verification methods. Victor stated that to help the customers, “We developed our anti-spoofing technology that can verify if the customers are actually who they say they are. By experimenting with the usage of automated technology, we not only saw verification could be processed at a much faster pace, but identity fraud can decline significantly”.

4- Inclusion of the Unbanked

Dr. Louise Maynard-Atem, a research lead at the non-profit organisation, Women in Identity, also provided her two cents at the hearing on the importance of making the digital infrastructure more inclusive. She stated that according to recent research in the US, 11% of adults do not have government-issued ID documents, 80% of adults don’t use a smartphone, and 5.4% of US households are unbanked. Bank accounts and government-issued ID documents are often the building blocks used for creating a digital identity. Thus, she believes that future technologies and frameworks must be devised in a way that all groups of society can reap the benefits of a digital identity. “In order to reach the full potential of digital identity verification, inclusion requirements must be specifically and explicitly mandated in all regulations and legislation”.

It All Boils Down to “Improving Digital Identity Act 2020”

At the start of the hearing, Congressman Bill Foster introduced the Improving Digital Identity Act 2020. This bill, once it comes into effect, would help develop a government-wide approach towards modernising the country’s lagging digital identity infrastructure through the formation of a special task force in the executive office of the President.

He believes that the time has come for the United Stated to catch pace with the rest of the world when it comes to digital identity. “The work and routine of daily life is increasingly done online – whether it’s banking, investing, shopping, or even communicating with doctors – and the COVID-19 pandemic has only accelerated this digital evolution. It’s become vitally important to ramp up safeguards to protect against identity theft and fraud, so consumers and businesses can have confidence in online transactions and the peace-of-mind of protecting sensitive information.”

All speakers at the hearing mentioned their support for the Act, citing that this legislation would set a high bar for improving online privacy, security and inclusivity in today’s digital world.

Need to secure the digital identity of your customers? Talk to our experts!