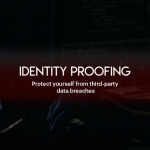 World economic forum states that Cyberattack is mapped as one of the top threats to global stability. A cyberattack occurs every 39 seconds. Research states that the global economy can lose $445 billion a year due to cybercrimes. The stolen data is used to defraud the businesses for financial gain which ultimately turns into the financial and value loss of the business. According to a survey of Insurance Information Institue, out of 3 million stolen identities in America, more than 50% of those stolen identities were used for online financial credit card fraud with banks and online businesses.
Such an alarming increase in cybercrime magnitude and methods have made the businesses to invest in global identity proofing and document verification solutions. A survey reports that 63 percent of companies have implemented a biometric system or plan to onboard a customer.

How a third-party data breach may become your liability?

Once an incident of data breach occurs it leaves an impact on several entities. The most common targets of the third-party data breaches are the businesses that do not have strong identity verification solutions integrated into their systems. The need for a strong identity verification solution cannot be overlooked by the businesses willing to prevail in the market for a longer period of time.

After stealing the legitimate data of individuals from some third party server the fraudsters move towards the next step and buys goods and services from online businesses using the stolen identities. The business delivers the goods and services charging from the illegally accessed account. Once the victim realizes about the misuse of his identity proofing he gets a refund due to consumer protection laws and the business is the ultimate loss bearer. Other than illegal purchases there is an array of crimes initiated with a mere stolen identity, most common are, terrorist financing, money laundering, human trafficking, drug dealing, etc.
The phenomenon of stolen identities could affect businesses of all kinds in many ways and can influence many industries simultaneously, let it be a financial institution, online business, hospital or non-profit organization identity theft has caused huge losses.

Once the individuals have access to the personal credentials of the individual he uses it often for financial fraud. Mostly the banks and financial institutions are defrauded through illegal transactions to an from the account of their legitimate client. According to a survey, online fraudsters managed to steal £1.2 billion from UK-based banks even in the presence of strict regulations regarding KYC (Know Your Customer) and AML (Anti Money Laundering). Also, the banks lost 123 million to internet banking fraud.
The fraudulent transaction fraud does not target the banks only. It targets all types of financial and fintech businesses. For example, a business facilitating online money transfer is defrauded by sending or receiving money using the stolen credentials. Other than that cryptocurrencies have been a very common victim of identity thieves and terrorists, the security loopholes make it easy for the criminals to hide their identity and money transfer trail.

The major data breach that hit Equifax in 2017 compromised the data of many individuals and businesses. The identity of a business, either big or small is a very valuable asset. Once that asset has been compromised it can start a range of losses for the business, including financial loss, loss of customer value, loss of competitive edge and the loss of competitive edge. Hence the misuse of a business’s identity could bring that business to its knees. The criminals could crack huge deals using the stolen credibility of a business. The identity thief might sell low-quality goods to the other business or client using the stolen business identity, ultimately this crime cycle will end with the loss of company value of the victim company.
The stolen business identity could be used for even more grave acts like money laundering or terrorist financing.

Getting a job with stolen identity:

The stolen credentials in a data breach are sold for as low as 10 to 15 dollars in the black web. Using these stolen identities the criminals get jobs at companies with the motive of hiding their true identity or to perform even bigger crimes like data breach while being an employee of the company. In case a business performs an efficient identity proofing on his employees before onboarding the new people, the risk of loss due to identity thieves is less than 1%.

Identity proofing helps the businesses to screen the true identities of the customers and employees before on-boarding them. The integration of AI-based global identity proofing systems adds layer after layer of security to the company profile. Hence the fake identities are highlighted before any damage could be done. Below is how timely investment in identity proofing solutions reduces the risk of loss due to third party data breaches:

All the above-mentioned solutions help the businesses in keeping the identity thieves at bay while making it difficult for the fraudsters to stolen identities to cause any loss to the business. The data breaches no matter how old, have the tendency to cause loss to all types of businesses. Businesses need to integrate an Identity Proofing solution into their systems so that the data breach of some third party like Equifax, google or facebook might not become your liability in the form of identity theft-related frauds.

Canada Revenue Agency or CRA in collaboration with an identity verification service called Secure Key is working towards launching a digitally secure system that will verify the identities of filers, whenever they wish to log into their website. The whole operation is basically centred around the premise that any citizen walking into a government office is able to verify their identity even if they are not carrying their ID documents with them.

The new identity verification methods will also enable the agency to weed out any criminals and fraudsters. They are also hoping to extend the service in the private sector wherein business from different sectors can use such services as a way of fraud prevention and detection.

The service that the CRA and SecureKey have also been working on is also being tested on banks to allow some sort of collaboration between banks and governmental agencies. This shall enable the banks to authorise their customers’ identities when they log in to their online accounts.

For the moment the service is being tested and fine-tuned for both the companies to use effectively. For the moment the CEO of SecureKey has expressed his commitment to completing the project and his goal to provide id verification in a secure manner that ensures the privacy of the end user. He also conveyed that the services are primarily focused on reducing fraudulent activities across businesses.

Currently, a number of businesses in the private sector including banks and financial institutions are urging for some way to get their systems linked to government databases to verify their users’ digitally and make their systems secure against identity fraud. What they are looking for essentially is to authenticate the users through multiple digital reference points including document verification, face verification through facial recognition and age verification.

On the other hand, they are also trying to test if the service would work the other way round. In that, the company wishes to see if a user applying for a loan at a bank, for instance, could be verified the bank to see if the person in question is really looking to apply for a loan or just trying to get access to finance. That said, the service is still in its testing phase and will take some time to be made available to the public and private sector.