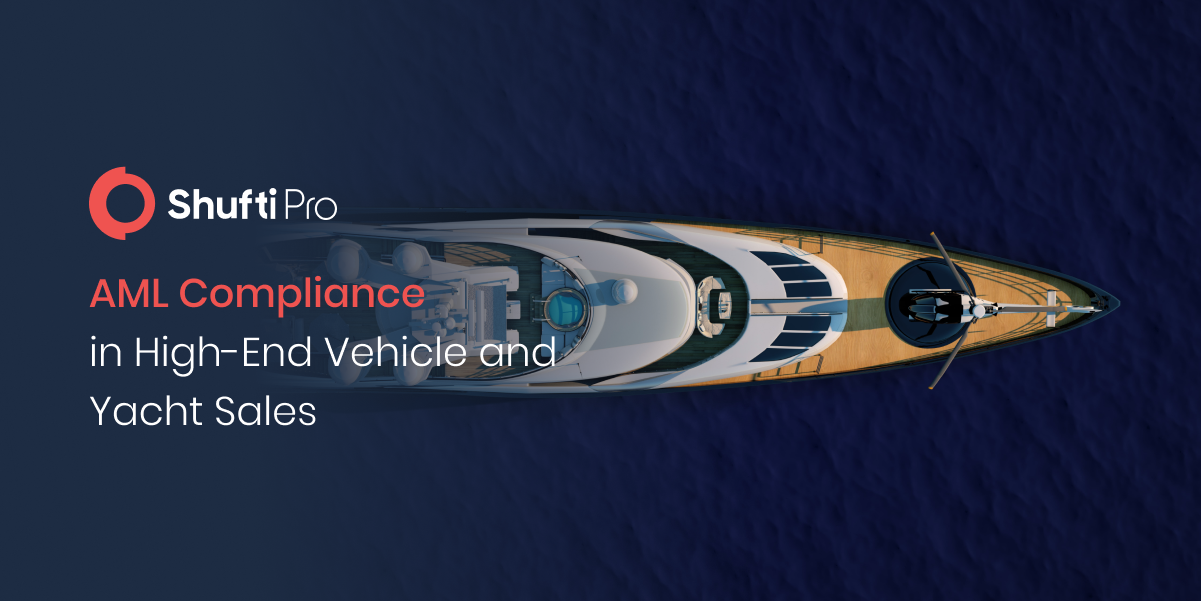 High-end vehicles and expensive properties are the universal status symbols that represent the excess of wealth and resources. Dealers that sell luxury cars like Rolls Royce and supercars like Lamborghini are used to having big names in their clientele, including wealthy politicians and football players.

However, high-end vehicles are not only purchased using legitimate money. Many of the wealthy politicians, kleptocrats, and oligarchs obtain their funds from the proceeds of crime. As a result, anyone working in the automotive sales sector without proper identity verification measures is at risk of becoming the source of money laundering.

Many years ago, a money laundering case made the headlines involving Malaysian businessman Jho Low, who purchased a superyacht for $250 million. It was found that the money was actually obtained from the Malaysian Welfare Fund. As things came to light, the businessman was nowhere to be found, while the yacht was put on sale for a price tag of $100 million less than what he had paid for it. Similarly, in July 2021, anti-corruption sanctions were imposed on the vice president of Equatorial Guinea, Teodoro Nguema Obiang Mangue, by the UK. Teodoro was known to steal government funds and obscure the origin of his money by purchasing luxury cars. The vice president had previously faced sanctions in 2016 and 2017 after European authorities seized his 26 supercars, including Ferraris, Bentleys, and Lamborghinis worth a total of $27 million.

What Makes the Automobile Industry Vulnerable to Financial Crime

The target audience of luxury car brands are clearly those who make big money, which is why these vehicles always have high price tags. This is one of the major reasons why the automotive sector is vulnerable to financial crime, as bigger amounts of black money can be spent at once in a single transaction. The financial criminal can then put the high-end vehicle on sale to gain legitimate cash.

Furthermore, car dealerships are comparatively less regulated than investment companies and banks, meaning that the monitoring and oversight on transactions is weak. In Canada, for example, the anti-money laundering requirements are not even applicable on car dealers. The lack of awareness among vehicle dealerships regarding the sensitive single cash transactions. Transparency International also states that high-value car dealers have a bad record of non-compliance with AML requirements. According to them, these businesses do not even report suspicious activities to the relevant authorities.

No Negotiation on Vehicle Price

Money laundering is the art of hiding the origin of funds obtained through illegal ways. When this criminal activity is being carried out, the money launderer is less concerned about the price tag and more about how he can quickly buy a luxury car with his black money. One of the most common red flags for money laundering in high-end vehicle sales is when a buyer does not even try to negotiate on a vehicle’s price. On the contrary, any real buyer would always try to bring the price down as much as they can by bargaining.

The process of money laundering isn’t over once the cash transaction is made. The criminal then has to sell the luxury vehicle purchased using dirty money and obtain legal funds. This means that buyers who visit car dealerships rather frequently to re-sell their car and buy another one are also potential money launderers.

Third-party payments are also part of the tactics used by money launderers as they are often ignored in Form 8300. As third-party names are not written on the purchase contract, the payments are usually overlooked, leading to suspicious transactions. As third parties facilitate payments in large amounts, details in the form of paper trails are significantly reduced.

Straw purchases involve a unique mechanism where the money is obtained by the car dealership but the name of the individual driving the car is not mentioned in the contract or title. The reason why straw purchases open doors for money laundering is when a third party provides money for the purchase to the buyer. Ultimately, the straw buyer sells the car within a defined time frame and sends the clean money to the money launderer, the third party.

It’s important for vehicle dealerships selling luxury cars to review their customers’ background information to check for possible suspicious activities. Financial criminals often use forged/fake documents and related paperwork such as foreign IDs or international driving licenses. These documents are used as a mask to hide their identity while proceeding with their illicit motives. Although there is a possibility that the buyer can have an identity document from a foreign country, car dealerships should employ identity verification measures to know who they are dealing with.

As per the latest AML regulations, vehicle dealerships are obliged to detect and report suspicious activities that may lead to money laundering and other such financial crimes. Normally, banks, insurance firms, and law firms are obliged to follow these requirements as they handle large amounts of money belonging to their customers. The same conditions apply to vehicle dealers as they receive large amounts of money in the form of payments for high-end vehicles. Depending on their size and location, car dealers can be categorized under financial institutions or high-value dealers.

Financial criminals deploy various sophisticated methods to obscure the origins of their ill-gotten funds. One of the convenient methods is the purchase of high-end vehicles with cash or through a car dealership to launder money. That being said, legitimate car dealers need to identify and report individuals and companies involved in suspicious activities by deploying AML Screening measures.

Rather than facing the consequences of unintentionally getting involved in a money laundering case, vehicle dealerships should put aside an amount of money for implementing a robust AML compliance program. Shufti Pro’s AI-driven AML Screening solution enables car dealerships to avoid sourcing financial crimes such as money laundering to stay clear of regulatory fines and other adverse consequences.

Want to learn more about AML Compliance for your vehicle dealership?