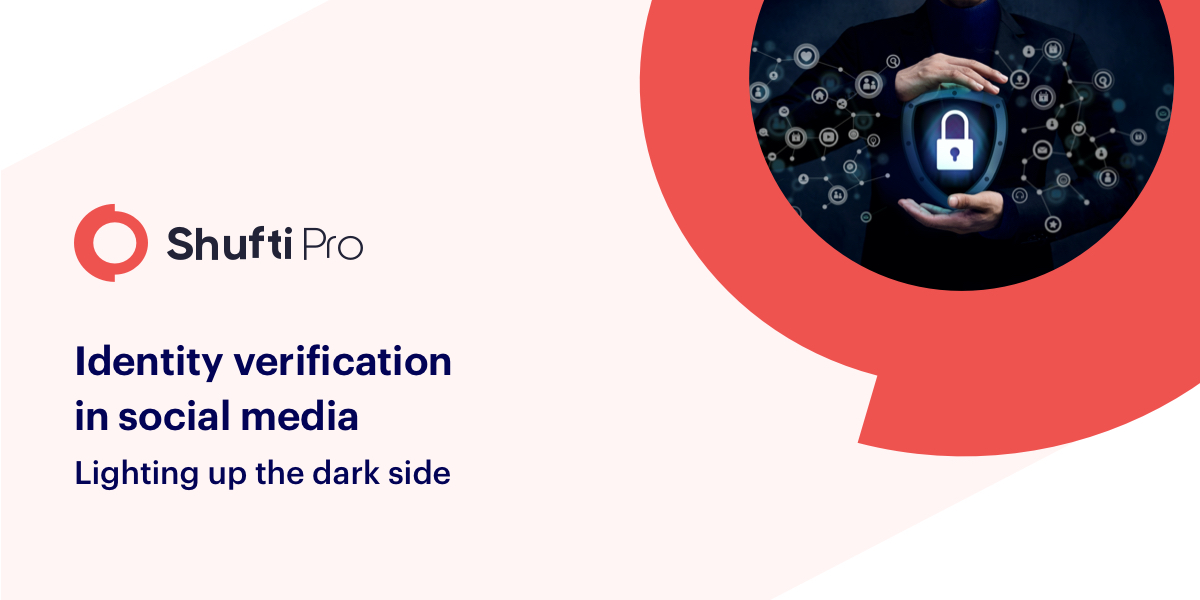 Identity verification in social media – Lighting up the dark side

Social media is a word every one of us can relate to. With every passing day, it is penetrating into our lives more than ever, completely transforming the way we communicate and interact with each other. The way we are using social media platforms is leaving a major impact on our life. Undoubtedly, it is overcoming the distance constraint by bringing people closer giving them space to connect. However, with the expansion of social media, the risks around people are also growing rapidly.

As the number of active social media users is increasing, more information is getting placed online. This has unveiled the untold threat of hackers, cybercriminals, and malicious interlopers mining your personal data for any personal or financial gain. Most of the time these bad actors intend to steal the consumers’ data and carry out indecent activities such as bullying and harassment.

Data is the New Currency

Living in a data-driven world, the rapid adoption of digitization is giving away a lot more than we think. All thanks to the prompt explosion of the internet that the global number of active social media users is estimated to be 3.196 billion; which is up 13 percent from the previous year and this growth of users isn’t going to stop anytime soon. Among all the platforms, Facebook is leading the market with 1.86 billion active monthly users.

These figures provide insight into the readily available data of users on social media. The users’ profiles on these networking sites pose a serious threat to their identities. These threats include multiple security concerns, data privacy risks, data breaches, digital frauds, and identity theft, etc.; the reason why social media platforms are arguably under scrutiny.

Not just social media, but any channel that incorporates personal information is under risk that the data will be exposed unintentionally and accidentally, for example, through a data breach, or intentionally by imposters and cybercriminals. The disclosed data can be sold on the dark web which is later on used for identity theft, impersonation, and carrying out fraudulent activities such as opening credit, taking a loan, etc.  To say data is the new currency for cybercriminals won’t be an understatement.

Hackers, spammers, cybercriminals are increasingly targeting social channels because of the presence of billions of users. Due to advancement in technology, getting into someone’s account is no more of a difficult task. Phishing attacks, social engineering tactics, brute force attacks are some of the most common ways of assisting cybercriminals to target and access the user profiles.

The compromised social media accounts are heaven for imposters, and hell for the victims because once they get into your account, they can easily impersonate you and can perform any activity they want to. Social media accounts are more appealing targets for these criminals for they are linked with multiple other and are more effective to spread hate, malware and viruses, and scam people as compared to conventional email.

It’s the human psyche that we tend to trust the messages that are received from friends instead of some stranger. People are careful in opening links that they get from third parties, however, they are more likely to fall prey to impersonated accounts perceiving it to be their friends’ profiles. Even worse, the user profiles reveal a lot of personal information, for example, name, date of birth, location, etc., that cybercriminals can leverage for identity theft.

Identity theft can be further used to open bank accounts, credit cards, take loans in the victim’s name. Imagine receiving notice from the bank to return the loan which you didn’t even recall taking. It means someone is abusing your identity for his personal benefit and financial gains.

The anonymity on social media is one of the major reasons for cyberbullying and harassment. Everyday we come across a harassment incident making news headlines. Though bullying has always existed, social networking channels have paved new ways for the predators to bully, harass, stalk and blackmail people online while staying anonymous and without the fear of being caught.

Making fake profiles on social channels like facebook, twitter, Instagram, etc. is not rocket science. By entering fake credentials, one can easily create a profile and perform whatever activity without any supervised monitoring or verification. Social media threats are not always from strangers, but it can be from someone we know seeking vengeance. Imagine waking up one day and witnessing your private information shared on some other profile. It’s like a privacy nightmare.

Such negative incidents leave a lifetime impact on the mental health of an individual which are often associated with anxiety, depression, low self-esteem, and even suicidal thoughts. A study reveals that the students who experience cyberbullying are two times more likely to attempt suicide. Moreover, suicide has become a leading death cause of people age 10-34 years.

Minors are no longer Protected

The widespread use of smart devices among children and their curious nature to explore everything online has pushed them into a dark pit. Minors are actively seen making social media profiles that are exposing them to the dark side of the tunnel. The existence of stalkers, pedophiles, predators and other criminals on the social media channels is nothing new, however, the unsupervised account monitoring and ease of creating profiles have led to a negative encounter with minors.

Over the past few years, many incidents of minor abuse have been reported. Though social media is not for children, yet a huge proportion of active users are under the age of 18 years old. The reason is the lack of proper age and identity checks to ensure that only authorized users can create profiles. This has grabbed the attention of the cybercriminals presenting them another opportunity to exploit children’s identities. A study states, the minors bullied online are nine times more likely to fall for digital frauds and identity theft.

The convenience of creating fake profiles on social media platforms are pushing the social channels into the dark pit. Taking advantage of this limitation, cybercriminals and fraudsters are coming up with multiple tactics to exploit the consumers’ data and use it for their personal and financial benefits. Not just them but predators, pedophiles and other bad guys out there are fully taking advantage of social media platforms to carry out their immoral activities like harassment and bullying.

The root of all these dark activities is the inability of social networking channels to verify the customer profiles at the time of creation and further putting verification and authentication checks to ensure that the account is accessed by authorized users only. Digital identity verification serves as a strong defense against such troublemakers and facilitates social platforms to get rid of the bad guys making social media a safe source of entertainment for users.

Moreover, based on the principles of artificial intelligence, ID verification solution exhibits age verification service to hinder the presence of minors on social media. It is not just a moral obligation of the business to ensure minors’ security and safety but also to efficiently meet regulatory compliances regarding minors’ online protection and user verification.