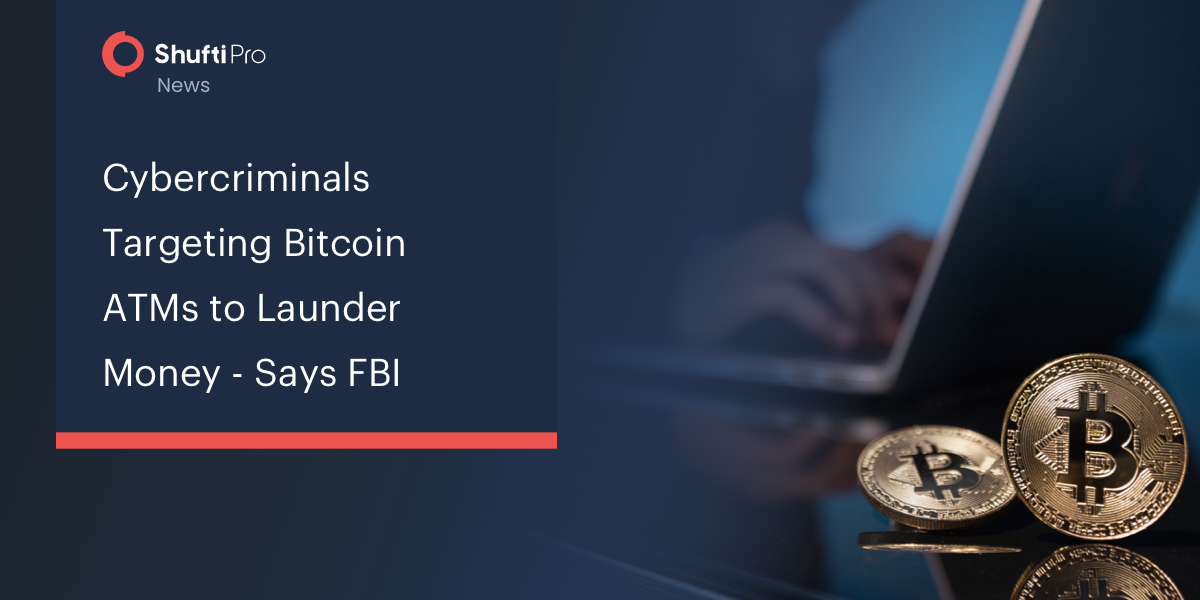 The FBI says criminals are using bitcoin ATMs around the state to carry out anonymous financial transactions for money laundering, drug trafficking, and various other frauds.

According to the FBI, this fraud has become more widespread as numerous bitcoin ATMs have been installed in the US over the past years. As per Coin ATM Radar research, more than 26,000 machines have been installed, a spike from 4,212 in January 2020.

The Bureau stated in a public service announcement,“The FBI has seen an increase in scammers directing victims to use physical cryptocurrency ATMs and digital QR codes to complete payment transactions,”.

“There are scams, there’s fraud,” said Lisa Cialino, counsel for the New Jersey State Commission of Investigation. “The most alarming thing is that there are owners and operators of these machines that truly know nothing about what they should be doing under the Bank Secrecy Act.”

Cryptocurrency ATM service providers are obliged to register with the U.S. Treasury Department’s Financial Crimes Enforcement Network. However, an investigation by the New Jersey Commission (NJC) published earlier this year observed that the present regulations are insufficient.

“Many machines permit near anonymity on purchases of up to $900 worth of cryptocurrency by allowing users to provide only a cell phone number,” the commission’s report said. “Some require no identifying information at all.” said the New Jersey Commission.

This situation is alarming for regulatory entities, who told CNBC that bitcoin machines are widely being used to commit financial and other criminal activities. The DEA report 2020 also warned that these machines can “aid in the movement of illicit bulk currency.”

Cialino told CNBC, “It seems like it’s very simple because a lot of these machines aren’t collecting information on the person doing the transaction”.

NJC’s report found more than $70 million was deposited for cryptocurrency purchases in the US between 2015 and 2020.

Marc Grens, president of DigitalMint said, “It leads us to believe, based on our due diligence, that these exchanges are great havens for those who are scamming an individual in the United States to send the fund out of the U.S. borders, that allows them to sort of claim the money and get full control over it”.

“Put together like minds in this space, in traditional financial services, blockchain forensics companies, banks, and other bitcoin ATM organizations that wanted to create a universally accepted standard to improve the industry,” Grens said.

“There is a crime. It’s never going to stop. This is just a new medium that has happened and that is happening, and we have real data that it is happening. And we want to work together to stop it,” Grens added.

CoinFlip CEO Ben Weiss said, “At every single level, there are additional pieces of KYC [know your customer] that are required. You have to have an AML [anti-money-laundering] KYC approach that’s commensurate with the risk, and for lower transactions, we don’t want to disenfranchise people,” Weiss said. “We want everyone to be able to buy $50, $100, $200 of bitcoin, regardless of their immigration status and regardless if they have an ID.”

In light of the New Jersey Commission’s report, a bill to regulate virtual assets activities is still pending. It would require virtual asset service providers to acquire permits from the state Department of Banking and Insurance.

Suggested Read: Bitcoin ATMs – how it works and KYC compliance