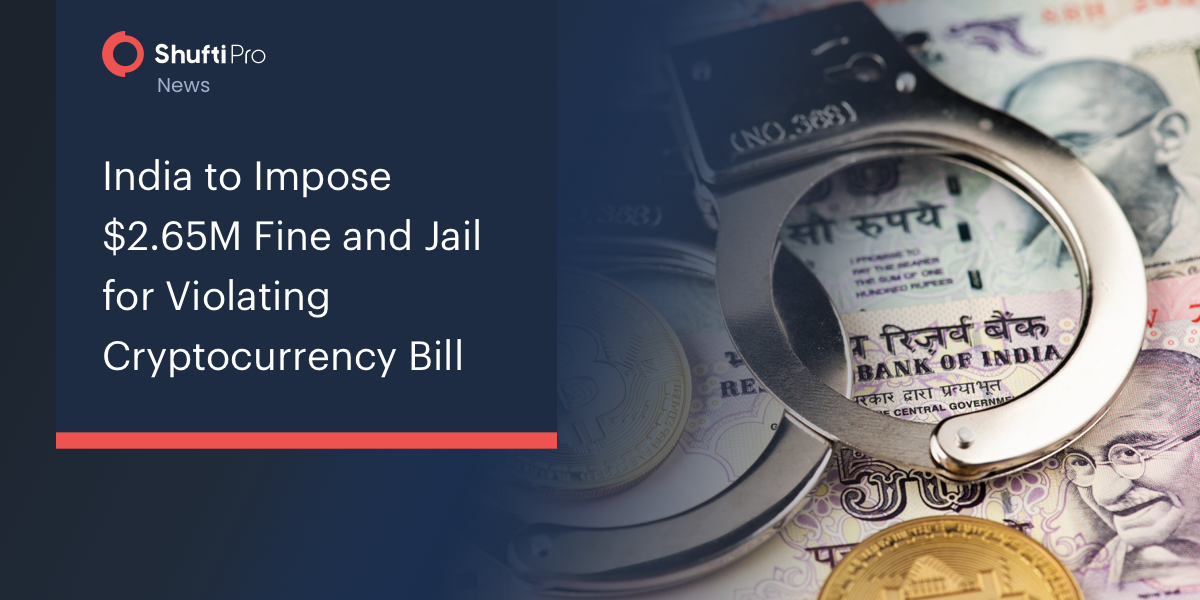 India’s financial watchdog has proposed a new crypto bill to impose a $2.65M fine and jail for violating cryptocurrency laws.

India’s regulatory authorities proposed a cryptocurrency law, which seeks to ban virtual currencies as payment gateway and also spread out hefty penalties for crypto enthusiasts upon attempts to break the law. The crypto bill is listed on the parliamentary agenda for the current winter session but is yet to be called for discussion. However, last week, the finance minister, Nirmala Sitharaman stated that the bill would be made public once it gets approval from the union cabinet.

According to sources, the crypto bill will set a “general prohibition on all activities by any individual on mining, generating, holding, selling, (or) dealing” in digital currencies as “medium of exchange, store of value and a unit of account”, all traits of any legitimate tender.

Moreover, violating these legislations will be treated as an offense and the criminal will be arrested without any warrant, and rights of getting bail will be taken. This can lead to fines for businesses and individuals up to INR 200 million ($2.65 million). However, fines are steep for a nation with an average salary of below $400 per month.

The NDTV report further added that perpetrator has to face imprisonment of up to 1.5 years but the Indian government would provide cutoff date for current investors to declare cryptocurrencies and comply with the new bill.

The Indian regulatory bodies are also planning to crack down on the cryptocurrency advertisements as they are pouring negative impacts as well as misleading the citizens.

According to the bill, the Securities and Exchange Board of India is appointed as the chief regulatory entity of crypto assets and exchanges. This means virtual asset service providers will be strictly regulated, however, the bill outlaws third-party wallets that facilitate customers to store digital currencies outside the exchange.

The proposed new policies are aligned with India’s central bank concerns, which have consistently called for cryptocurrency ban. The bill also aims to secure conventional financial institutions from risks associated with cryptocurrencies.

“If no payments are allowed at all and an exception is not made for transaction fee then it will also effectively stop blockchain development and NFT, since transaction fees need to be paid with crypto,” Anirudh Rastogi, founder of law firm Ikigai Law, told Reuters.

In this regard, Gaitonde, crypto company advisor said that the proposed law allows people to buy and sell tokens but excludes Indian investors from taking part in overseas decentralized ledger technology ecosystem.

“If crypto regulations state that only licensed crypto exchanges can hold tokens, the universe of crypto projects available to people shrinks greatly because it is impractical for any such exchange to list tokens from every decentralized project,” Gaitonde said.

“Similarly, if regulations forbid the use of non-custodial wallets, then DeFi projects, NFT marketplaces, decentralized software or dApps, blockchain-based games, and such innovations become inaccessible,” he added.

Despite all the discussion,  the Indian crypto community is still keeping hopes high and expects that the final bill will provide more flexibility in dealing with cryptocurrencies.