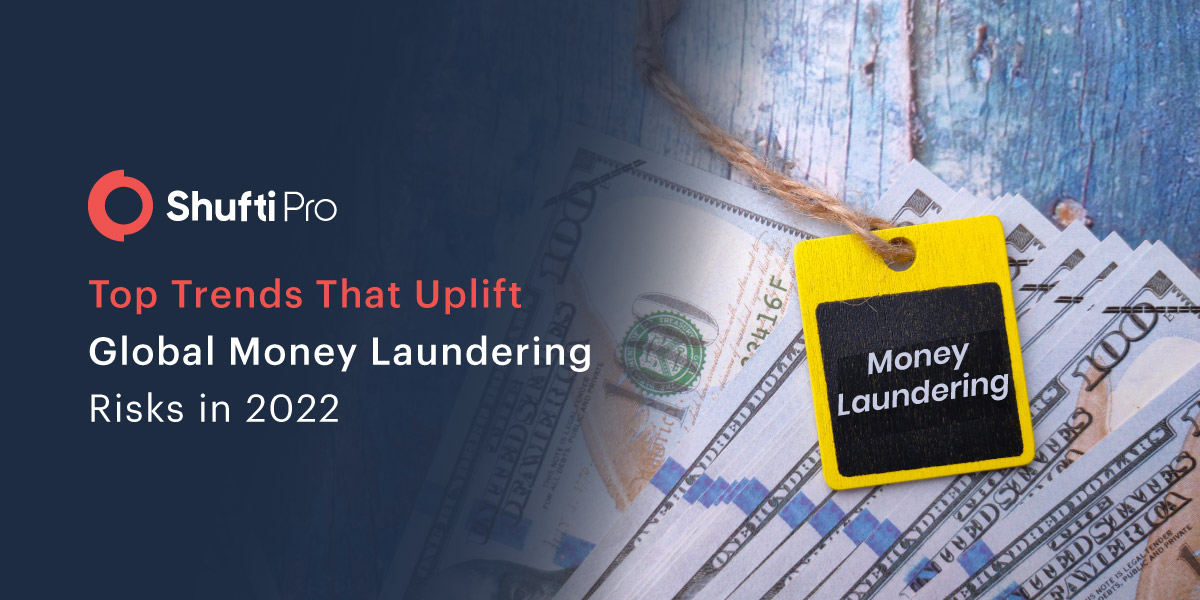 Top 4 Reasons that will Increase Money Laundering Risks in 2022

Unlike other frauds, like like tax evasion, drug trafficking, extortion, and misappropriation of funds, money laundering emerges from precursor criminal acts. However, most of the money laundering activities are carried out by Transnational Criminal Organizations (TCOs), rather than individuals. Usually, bank accounts are set up for personal or business use to launder illicit money. Due to this reason, global financial regulators like FATF, FINCEN, FINTRAC, AUSTRAC, and several others have emerged with Anti-Money Laundering compliance, aiming to identify and deter money laundering activities throughout the world. AML regulations are mandatory for all types of businesses but primarily beneficial for financial institutions. Nevertheless, many financial firms were fined around $5.4 billion for AML failing in 2021.

Even though the use of emerging technologies like artificial intelligence, machine learning, and big data for countering financial crimes, insufficient anti-money laundering systems are contributing to increasing money laundering and terrorist financing activities. Countries across the globe are not maintaining required scores for anti-money laundering and most of them are flagged for having shortcomings. However, according to the global index, while the government may have legislated many laws and policies and are streamlined with the FATF recommendations, they are mainly not worthwhile in reality. This results in an increase in financial crimes as well as hefty fines being imposed on the financial firms.

The Hong Kong monetary authority imposed hefty fines on four banks including the local branches of the Industrial and Commercial Bank of China and UBS. The combined amount of the fines for AML failing was HK$44.2 million. However, according to Reuters, the HKMA said in the statement that the reason for these fines is insufficient to measure customer due diligence, monitoring of customers’ transactions, and ongoing review of banking activities. All the alleged bans were penalized with huge AML fines. The Industrial and Commercial Bank of China (ICBC) was fined HK$20.7 million, while UBS was fined $9 million, China Construction Bank was fined HK$8.5 million, and CTBC bank Hong Kong was fined $6 million.

According to Carmen Chu, the HKMA’s executive director (Enforcement and AML), “Banks should make reference to these case examples to review data quality and respective transaction monitoring system effectiveness.”

“The identified deficiencies in the four cases occurred in a period … when industry understanding and experience were less mature, and since then, significant progress has been made by the industry, including the banks concerned.”

2. Jurisdictions are Battling With How to React to Money Laundering Dangers Posed by Virtual Assets

As cryptocurrencies and digital assets are becoming mainstream, the global financial watchdogs, and governments are efforting to address the money laundering and terrorist financing associated with them. According to the FATF recommendation 15, to identify and deter the risk arising from cryptocurrencies, nations around the world such ensure that the virtual assets service providers are regulated under AML/CFT regulations and subject to enhanced systems for monitoring transactions, ensuring that the businesses are compliant with the regulations as well as the FATF recommendations.

Several investigations were conducted in the last few months by the Dutch regulatory authorities, including the National Criminal Investigation Services, the Public Prosecution Services, and the Tax Authority’s financial investigations services FIOD. The inquiries concluded that more than $29 million worth of Bitcoin and Ethereum from digital wallets of multiple money launderers were seized. However, many of the criminals were not identified due to the lack of effectiveness of the anti-money laundering framework.

3. The Inadequate Implementation of UBOs Registers

Both financial institutions and designated non-financial businesses and professions (DNFBPs) are required to conduct customer due diligence. According to research, DNFBPs continue to fail to comply with the AML/CFT compliance. In addition to this, DNFBPs are not only vulnerable to money laundering, terrorist financing threats and also have insufficient AML/CFT framework, creating a serious loophole to curb financial crimes. Thus, DNFBPs lack understanding of risks and responsibilities, ineffective execution of AML/CFT procedures, and insufficient monitoring and oversight. It argues for increased oversight in order to maximize efficacy.

How Can Shufti Pro Help?

Shufti Pro’s anti-money laundering screening service is a viable solution for every business. This allows companies to comply with the laws by authorities such as EU, FATF, FINTRAC, AUSTRAC, and others. In addition to this, customers are screened against 1700+ global financial watchlists in less than a second with 98.67% accuracy.