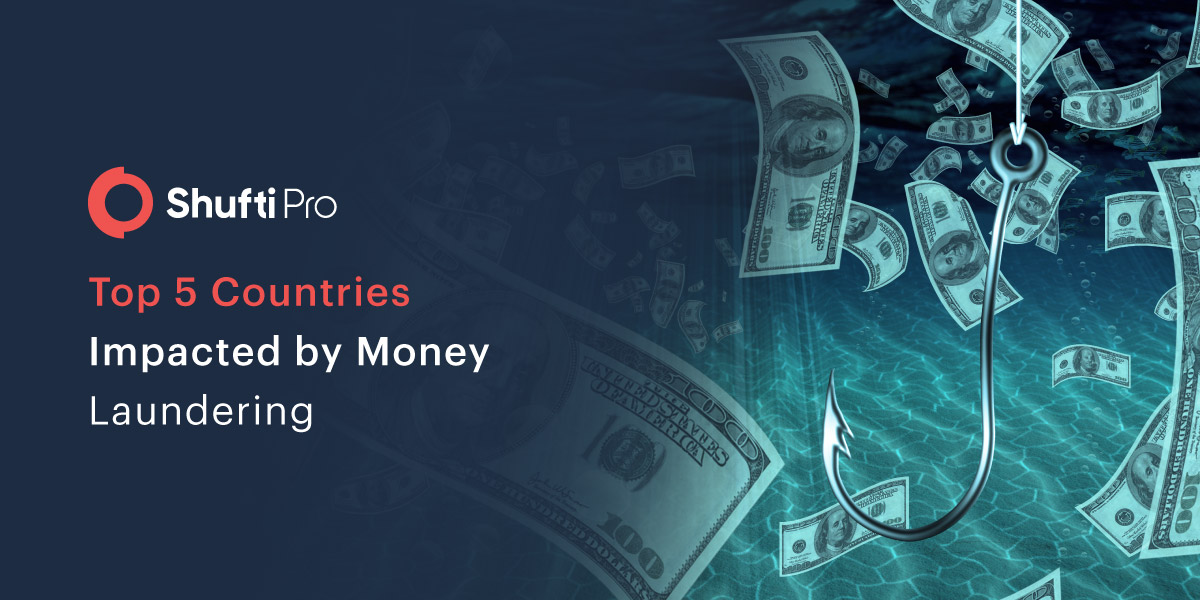 With the use of advanced technologies, money launderers have become more sophisticated and are now able to exploit security as well as verification systems to wash their illicit gains. To curb money laundering, the global anti-money laundering regulatory landscape is getting diverse and every business needs to keep pace with evolving rules to remain compliant.  AML compliance are legislated with an aim to mitigate the risk of money laundering and terrorism financing. Financial firms are obliged to monitor their customers and report instantly to the regulatory bodies.

Top 5 Countries Having a High Risk of Money Laundering

The Netherlands is the 17th largest economy in the world and the 7th largest in the EU with a GDP of $914 billion. In addition to this, the country has its own central bank, De Nederlandsche Bank. The Netherlands is also a global financial center with a highly developed financial services sector. It is also considered a major commercial transportation hub, as well as petroleum extraction and processing. However, the banking sector accounts for a major portion of its GDP. Due to this, in recent years, several big banks have become part of the news for either their involvement in money laundering activities or anti-money laundering failings. Thus,  Money laundering has become a crucial risk in the Netherlands as almost 16 billion Euros get laundered annually in the country.

However, in 2011, the Financial Action Task Force (FATF) published a Mutual Evaluation Report for the Netherlands where the country was deemed compliant for twenty-two of FATF 40 Recommendations. In addition to this, it was non-compliant with 2 of the 6 Core Recommendations. Furthermore, in 2019, a second National Risk Assessment (NRA) was also conducted. According to investigations, it was noted that the country was still prone to money laundering activities. Among the top fifteen money threats found in the Netherlands, the greatest was money laundering through cashless transactions with legit banks. The NRA also highlighted that regardless of rigid AML controls, there were still some areas that lacked proper regulations, particularly cryptocurrency transactions that remain anonymous. Other than this, drugs and financial fraud almost account for 90% of money laundering in the country.

On 12 October 2021, Netherlands leading bank, Rabobank received a draft from the Dutch Central Bank (DNB) ordering it to enhance their AML/CFT controls as its failure to detect the money laundering activities. The DNB suggestions were mainly associated with the “execution, recording, and outsourcing of Customer Due Diligence (CDD), transaction monitoring, and Suspicious Activity Report (SAR).”

Like this, another draft was also issued in 2018 that ordered the bank to “improve its Know Your Customer (KYC) compliance activities.”  Moreover, while the central bank conducted a series of investigations again, on 1 April 2020, DNB concluded that Rabobankfailed to fulfill the injunction requirements, despite all efforts. Hence, due to violating the  Dutch Anti-Money Laundering and Anti-Terrorist Financing Act, the DBN imposed a fine of EUR 500,000 to Rabobank. In addition, the DNB has also announced that it will start punitive enforcement procedures against the bank.

The United Arab Emirates has become a regional hub for financial activities and trade that has assisted the country’s financial service businesses to expand immensely. Due to this, financial criminals are taking advantage of the open financial business environment to launder illicit gains. However, in past years, the government and law enforcement authorities have taken significant steps to improve its AML/CFT program. Moreover, the financial watchdogs and the businesses still need to streamline the internal controls to enhance the interagency of the decision-making process. In addition to this, the UAE should also work to make money laundering investigation procedures robust and take proactive steps to implement laws to curb financial crimes.

The United Arab Emirates executive office to combat money laundering and terrorist financing has claimed to collected $1.048 billion in fines from the businesses for AML/CFT failings. The amount of fine was collected in the form of asset seizures worth $625 million, and penalties of up to $64 million for having shortcomings in AML controls. In addition to this, some of the UAE’s major financial firms including the banks paid a total of $5.3 million, along with the fine of $10.8 million associated with tax evasion and money laundering. Other than this, $234 million was also imposed on 48 entities and companies that failed to comply with preventive measures against terrorist financing.

However, Mozambique is not listed on the FATF lists, yet it has been highlighted as having strategic AML shortcomings. Money laundering in-country is mostly driven by kidnappings, human trafficking, state funds, terrorism, and wildlife trafficking. However,  The Attorney General (PGR) and Bank of Mozambique (BOM) have taken initiatives to address money laundering risk, and the government has taken steps to enhance the AML/CFT regulations and framework. Despite these steps, judges, police, and attorneys lack the technical resources and power to fight money laundering cases. Thus, in 2019 Mozambique was flagged to have the highest risk of money laundering and terrorist fiancing out of 125 countries.

Credit Suisse has been fined nearly £350m by the financial watchdog, as they were pleaded guilty to wire fraud, and agreed to forgive the millions of dollars worth of debt owned by Mozambique in an attempt to draw a line under the “tuna bonds’ loan scandals.

The Swiss banking company had been accused of serious regulatory failing by the Financial Conduct Authority (FCA), and has entered into a deferred agreement with the US Department of Justice that will put the bank under heavy monitoring for further three years “defrauding the US and international investors”.

The economic, legal, and geographical background makes the country a perfect destination for money laundering. For example, Vietnam’s economy is largely based on cash which makes it quite easy for criminals to move illicit cash through Vietnamese borders. In addition to this, Vietnam is one of the rapidly growing economies in the Southeast Asian region but has weak legal systems including lax AML controls that are another facilitator of money laundering.

Singapore is among one of the busiest and most innovative financial hubs and destinations for financial service businesses across the globe. Due to this reason, there has been a significant rise in money laundering activities, thus, the country is becoming subject to anti-money laundering regulations. To overcome the surging risk of money laundering the Monetary Authority of Singapore (MAS) has developed a digital platform which is called Cosmic that enables the financial firms operating in the country to share the customers personal as well as transaction information. By doing this, every institution can thoroughly screen the customers before onboarding them, an effective initiative to tackle money laundering and terrorist financing.

Shufti Pro’s state-of-the-art anti-money laundering screening services are ideal solutions for financial service businesses that can assist them to stay put with the ever-evolving AML regulation regime while screening customers against 1700+ global financial watchlists with 98.67% accuracy in less than a second.