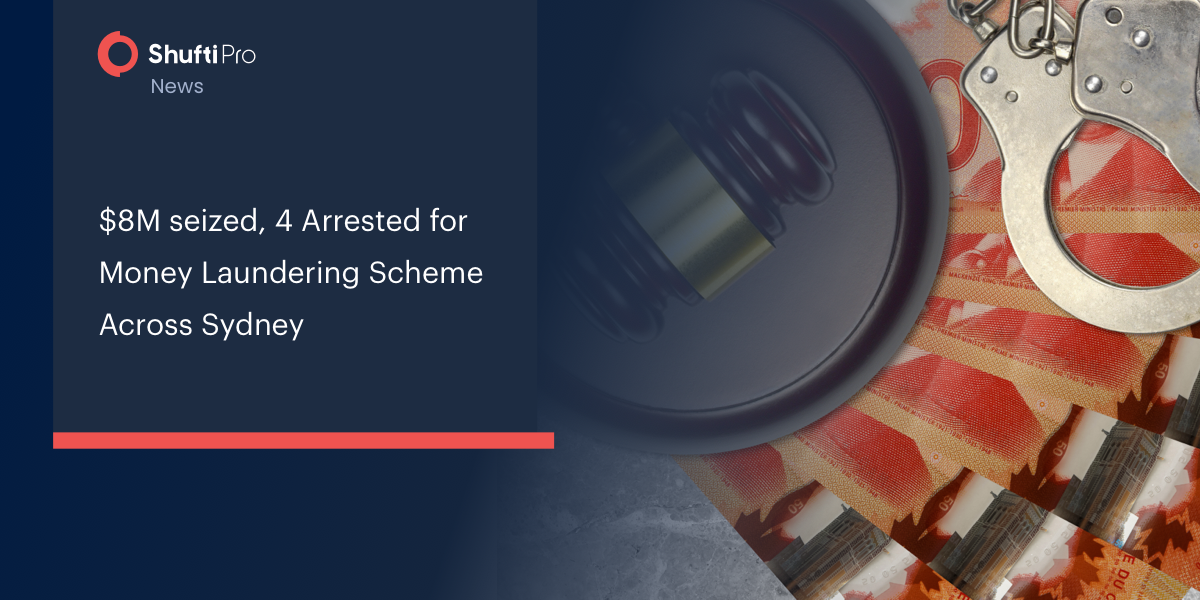 Sydney law enforcement authorities have seized more than $8 million cash and arrested four criminals involved in money laundering activities and supplying drugs across the city. To determine and investigate such syndicates, Strike Force Trobriand was established in January 2021.

The investigations led Sydney police to the home of the 32-year-old suspect on Canning Street at Lidcombe on January 6 where he was served with Firearm Prohibition Order before searching the premises. The police recovered $260,000 cash and seized an ample amount of a drug known as MDMA (methylamphetamine), which was sent for forensic analysis. Following the hidden patterns of crimes, investigators and the Raptor Squad issued four search warrants to arrest suspects in Burwood, Campsie, and Rhodes.

A 27-year-old and 30-year-old suspects were also arrested from different locations on Belmore Street at Burwood, as law enforcement bodies searched criminals’ homes and found more than $60,000 cash. The alleged couple was sent to the area police station.

Other than this, police also found $3.1 million cash at a Rhodes unit a short time later, before confiscating further $4.78 million from the trunk of the car parked in the unit complex parking. More cash was also found from the suspected home on Sixth Avenue at Campsie. Two alleged individuals, a 32-year-old arrested at Campsie address and a 48-year-old was arrested at Rhodes was also sent to the Burwood police station.

The 48-year-old suspect was charged with three criminal deals and routing tobacco products knowingly across the area. Other than this, a 30-year-old Burwood individual was also charged with the same allegation along with active participation in a criminal group that contributed to bogus activities like supplying illegal drugs in large quantities.

The 27-year-old was charged with intentionally being involved in crimes, holding illicit cash, and prohibited drugs. Another 32-year-old was arrested due to six offenses including intently being involved in criminal activities, possessing illegal drugs, holding prohibited or unlicensed weapons, two counts of excluding persons entering a casino, and knowingly leading activities of a criminal group. The three alleged individuals bail was refused and faced Burwood local court, while the fourth was sent to Bankstown local court.