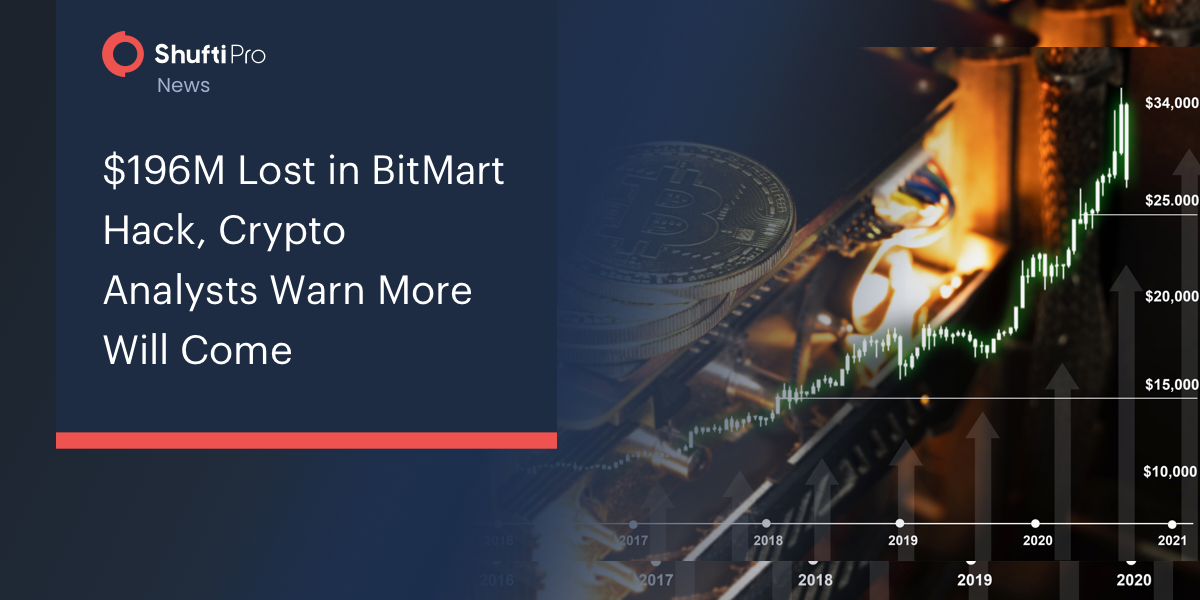 BitMart, one of the world’s largest cryptocurrency exchanges, lost $196 million in a recent hack due to ineffective compliance infrastructure.

Crypto analysts have warned that cryptocurrency technologies have made it easier for fraudsters to hide their tracks after successfully stealing $196 million from crypto exchange “BitMart”.

The exchange is the world’s 118th largest cryptocurrency provider, based on client traffic, trading volumes, liquidity, and customer trust. However, BitMart customers’ confidence has shattered after the exchange announced it had fallen prey to cybercriminals.

“We have identified a large-scale security breach related to one of our [ethereum] hot wallets and one of our [Binance] hot wallets today,” BitMart confirmed in a statement on Saturday. “At this moment we are still concluding the possible methods used.”

The cryptocurrency exchange estimated that masterminds of the multi-million dollar hack had fled with nearly $150 million in digital currency. However, blockchain security experts later pointed out that the theft was around $196 million.

The crypto heist was first noticed by the cyber experts when an unusual flow of $10 million was detected from exchange to an anonymous address. BitMart stated that the hack had only affected “a small percentage of assets on BitMart and all of our other wallets are secure and unharmed.”

“We are now conducting a thorough security review and we will post updates as we progress,” BitMart added. “At this moment we are temporarily suspending withdrawals until further notice.”

It’s ambiguous how the hackers broke into BitMart. However, the security companies said that the cybercriminals used the transfer-out, swap, and wash approaches to overcome the risk of getting traced. The cybersecurity analyst also stated that due to insufficient infrastructure criminals are able to easily hack into crypto exchanges for their financial gains.

“The technology underpinning cryptocurrencies makes it far too easy to steal large sums of money, often leaving little or no trace as to where the money has gone or who has stolen it,” Jake Moore, cybersecurity specialist at ESET. “Sending funds to an ethereum mixing service is common for those wanting to evade being followed by the authorities, so better initial prevention for those with digital funds is vital to help mitigate this growing trend.”

“Users can add layers of protection such as 2FA and remain on guard against cleverly targeted phishing emails but crypto exchanges could potentially add extra layers of security when money is requested. Multiple verification techniques over certain amounts of money can slow thieves down and potentially reduce or even prevent the money from being taken”, Jake said.

BitMart was warned before this hack that cybercriminals can take over the security systems due to the absence of Know Your Customer (KYC) practice, thus making it difficult for the regulatory bodies to track down criminals.

Therefore, financial regulators across the globe are now determined to come up with more strict laws and policies to halt the usage of digital currencies in financial crimes.