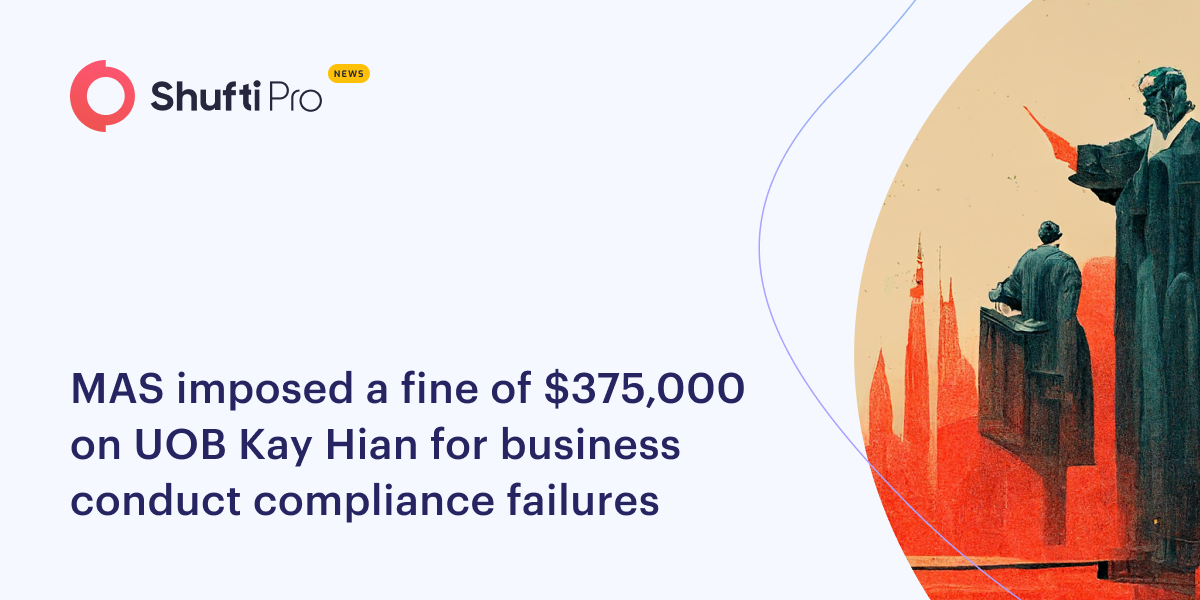 The Monetary Authority of Singapore (MAS) imposed a fine of S$375,000 on UOB Kay Hian, a brokerage firm, over business compliance negligence. The company paid the full penalty and remediated the failures.

On Wednesday, UOB Kay Hian, a brokerage firm, was fined for not following business conduct protocols. MAS (Monetary Authority of Singapore) imposed a fine of S$375,000 on UOBKH for securities compliance failure and not obeying anti-money laundering & financing terrorism requirements.

Additionally, UOBKH also failed to verify customers’ source of wealth, even though the firm determined them to be a higher money laundering risk. According to the investigation conducted by MAS, they found UOBKH guilty of not following the protocols. Moreover, some failings include accepting third-party receipts representing a considerable value of an initial price offering. It was done without properly analyzing the business conducting measures.

“As a result, UOBKH failed to detect and report suspicious transactions despite red flags of potential nominee arrangements, which may be abused to conceal beneficial ownerships and facilitate market misconduct,” said the Monetary Authority of Singapore.

As per investigation by MAS, the brokerage company hadn’t conducted its corporate finance department’s internal audits since its startup in September 2012. They said that UOBKH paid its full penalty and remediated the matter by performing essential measures to maximize its internal controls and policies.

It was instructed to the brokerage firm to appoint an external party to check and authenticate implementation of the remedial measures. Furthermore, that third party will report the effectiveness of preventive protocols taken by UOBKH to MAS.

Loo Siew Yee (the managing director of MAS) said, “MAS expects capital markets services licensees to comply with all business conduct and AML/CFT regulations, including ensuring that its control functions act as an effective and independent line of defense against risks.”