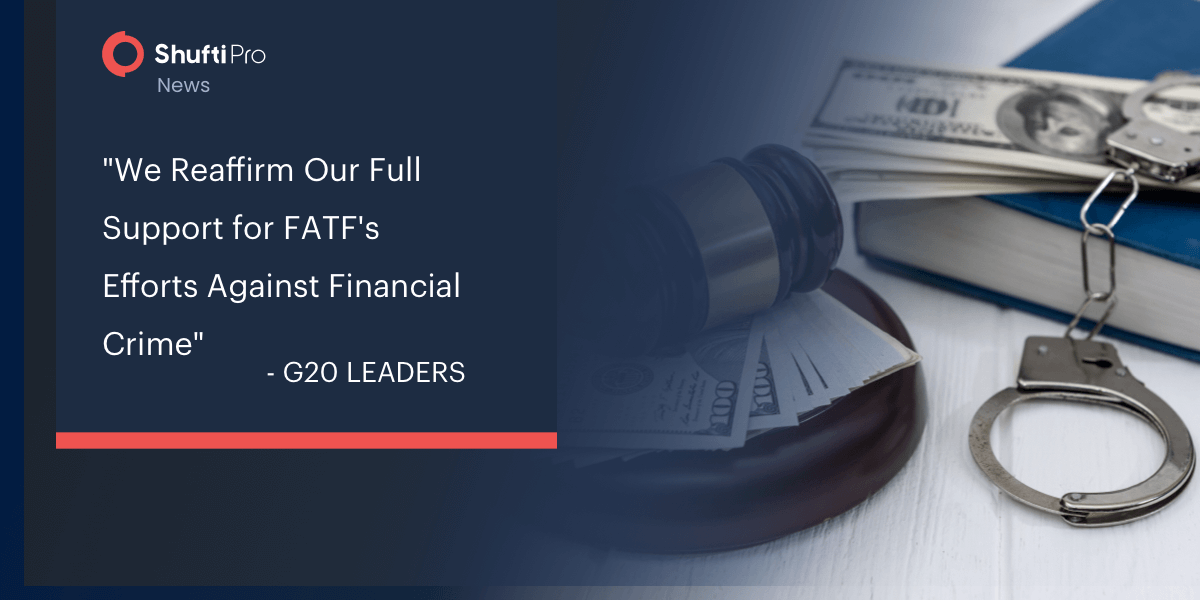 According to the Rome Declaration, G-20 leaders ensure full support to back FATF recommendations to combat financial crimes while protecting human freedom rights.

G-20 leaders, including Prime minister Narendra Modi, have assured their complete support for the Financial Action Task Force (FATF) and acknowledged that adequately executing the methods to counter money laundering, proliferation, and terrorist financing is crucial for establishing, securing, and protecting the global financial landscape.

As stated in the Rome Declaration published on Sunday, the G-20 leaders emphasized the significance of the risk-based strategy of the international AML regulations and Paris-based terrorist funding watchdog’s guidance having the objective of assuring legit international financial transactions.

“We reaffirm our full support for the Financial Action Task Force (FATF) and the Global Network and recognize that effective implementation of Anti-Money Laundering/Countering the Financing of Terrorism and Proliferation (AML/CFT/CPF) measures is essential for building confidence in financial markets, ensuring a sustainable recovery and protecting the integrity of the international financial system,” as declaration pronounced.

Additionally, FATF declared that Pakistan will still remain on the “Grey List” until Pakistan shows efforts to take action against the political party “Jamaat-ud-dawah” run by Hafiz Saeed and Jaish-e-Muhammad founder Masood Azhar who are flagged as the global terrorist by the UN. FATF placed Pakistan on the grey list in June 2018 as it failed to fulfill the FATF requirements. Whereas, other than Pakistan FATF have also placed turkey, mali, and Jordan on its grey list.

As published in Rome Declaration, the G-20 leaders assured that they will support FATF recommendations in order to enhance the Ultimate Beneficial Ownership (UBO) transparency and asked the 20 nations to eradicate financial crimes, especially acting in accordance with the watchdog’s report that states, “We reaffirm the commitments made by Finance Ministers and Central Bank Governors aimed at sustaining and strengthening the work of the FATF-Style Regional Bodies,”

The leaders of 20 nations also declared that they will render efforts to improve the digital space credibility by enhancing the cybersecurity measures and combating digital crimes, harassment, violence, and terrorism activities while securing the human rights of freedom.

The G-20 leaders also reiterated their devotion to zero tolerance for corruption in both public and government sectors and shortlisted mutual goals to counter corruption, to do so they embraced the 2022-2024 Anti-Corruption Action Plan (ACAP).

Regarding corruption concerns, the declaration also stated, “We are committed to fighting any new and sophisticated forms of corruption. We endorse the G20 High-Level Principles on Corruption related to Organized Crime, on Tackling Corruption in Sport, and on Preventing and Combating Corruption in Emergencies, and adopt the G20 Anti-corruption Accountability Report. We reaffirm our commitment to deny safe haven to corruption offenders and their assets, in accordance with domestic laws and to combat transnational corruption,”.

G-20 is an international forum that combines the major economic nations globally. Its members contribute to almost 80% of the world GDP, 75% of international trades along with 60% of the global population.