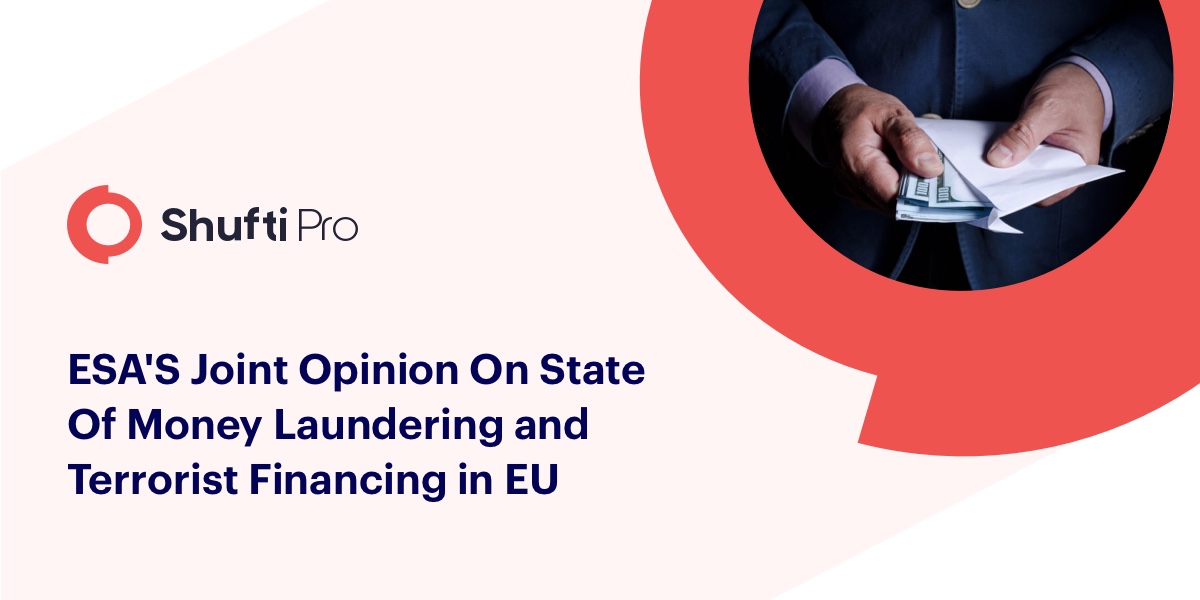 AML Compliance in EU Member States and Risks of Businesses

Making regulations is just the first step, the true game starts when it comes to implementation, the European Supervisory Authorities report gave this clear message.

European Union regulatory authorities are always in a wake to improve Anti Money Laundering (AML) and Counter Financial Terrorism (CFT) regulations. Currently, the fourth AML directive is in action in the member states of the EU. Europen Union Supervisory Authorities (ESAs) recently gave a joint opinion based on the AML and CFT data collected from the member countries and expressed their concerns regarding the CFT and AML compliance in the reporting entities.

The member countries are required to give this joint opinion on money laundering and terrorist financing risks in the EU financial sector every two years based on Article 6(5) of (EU) 2015/849 (the 4th AML directive). The ESAs (EBA, EIOPA, ESMA) report showed concerns regarding monitoring transactions and suspicious transaction reporting, cryptocurrencies, Brexit, and the risks associated with operations of businesses that handle a large number of financial transactions.

The ESAs expressed some major concerns regarding the risks lurking in the financial infrastructure of EU countries. The detailed report contained the data proof of how credit institutions are exposed to more risk as compared to previous years.

The uniform implementation of the 4th AML directive is a challenge as the legislations in a country are influenced by several stakeholders. The report of Joint Supervisory Authorities (JSA) highlighted that political and regulatory entities in the countries influence the implementation of the EU AML and CFT regulations. The countries often don’t understand the regulations properly and there is a lack of uniformity in the regulations across the EU so it leaves a loophole for the companies that plan to do illegal business. For example, if one country is rigid in AML and CFT compliance then the businesses or the criminals move to other countries with relatively lenient regulatory compliance requirements. So, it affects the effectiveness of AML and CFT regulations.

The United Kingdom is all set to leave the European Union in some time. The report of the ESAs identified that the firms working in the EU will be affected by this change in the EU landscape. The firms listed in the UK will have to update their operations as per the new UK regulations. Also, the firms outside the UK will have to get themselves registered with the UK as per the new regulations.

This huge change in the infrastructure will affect the regulatory landscape of the EU. Most probably it will make loopholes for financial criminals. The UK was used by the shell companies in the past, and now this sudden shift in regulations will definitely take some time, so, the criminals are most likely to gain over this delay.

Technology is a freeware that is used equally for fraud and fraud prevention. The advent of Fintech and Regtech definitely improved the operations in the financial sector but it also increased the risk. Lack of regulations and minor regulatory compliance in this sector is the source of risk. Fintech and Regtech are widely adopted by people and are very dear to legitimate users due to the ease created due to these solutions.

Cryptocurrencies are major concerns of the JSAs. Although the AMLD5 and AMLD6 are drafted to address this risk. Lack of regulatory awareness and commitment in the cryptocurrency ecosystem are some major concerns expressed in the report. The EU is also planning to increase the scope of “virtual currencies” to “virtual assets” as per the FATF regulations. This is because there is a lack of awareness among the businesses offering the cryptocurrency services.

The businesses in the EU countries are found to be lacking in AML and CFT compliance, the report stated that sanctions screening is not enough. The businesses have to keep an eye on the transactions of their customers as well. Complete reliance on CDD is the loophole in the internal controls of firms.

Also, businesses are required to practice compliance in a smart manner. In case they completely disown the customers based on the high risk associated with them, it will increase the chances of money laundering in the EU.

The report highlighted that some credit institutions are exposed to major risks due to their business operations. Financial transactions as the key part of their operation so the risk of being exploited by money launderer sand terrorist financiers is high. The businesses are required to practice proactive fraud prevention and CDD.

To wrap up, the businesses in the EU and outside the EU will be affected by the increased pressure on AML and CFT compliance among the member countries. The businesses from non-member countries will also be affected by this. The EU has also recommended the reporting entities to practice the EU regulations outside the region (Non-EEA states). The Brexit is also expected to happen in the near future so it will also affect the operations, regulatory compliance of the global businesses. Proactive fraud prevention, thorough regulatory compliance, and timely decisions will help businesses in achieving high returns in the future.