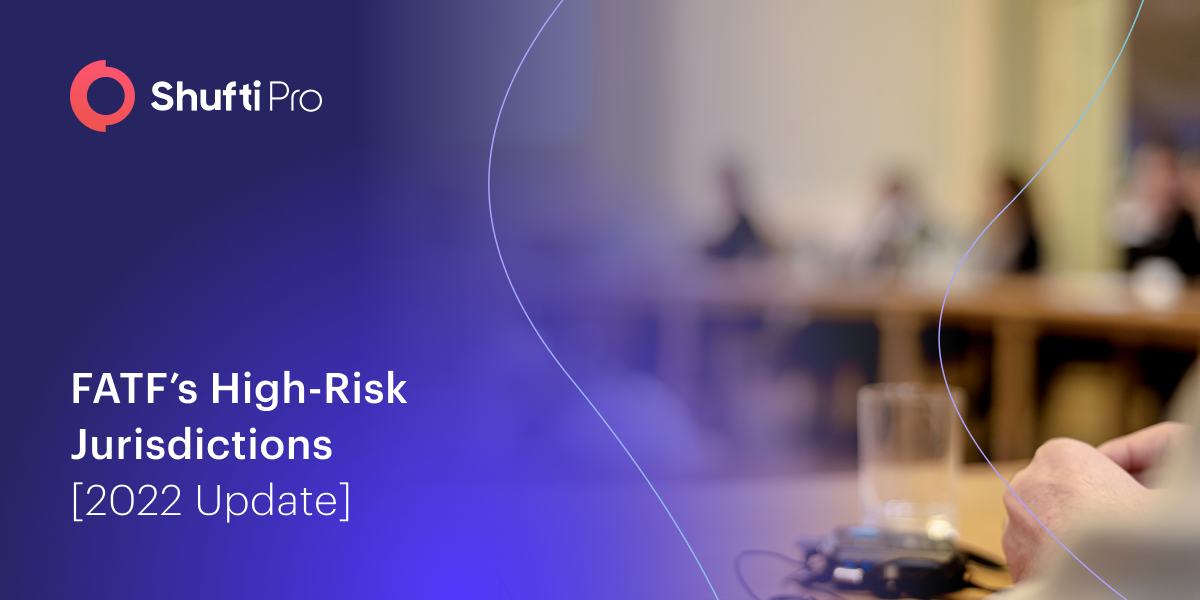 AML/CFT measures allow business and financial institutions to detect and mitigate the risks of financial crimes that can lead them to legal problems and hefty penalties. That being said, the AML/CFT measures adopted by different countries around the world vary depending on the legislation.

Countries that do not implement stringent regulations for AML/CFT experience report regular instances of money laundering and corruption in financial operations and government institutions. For instance, the Russian invasion of Ukraine gave rise to money laundering through real estate, art, and luxury yachts. Wealthy Russians began looking for ways to obscure the origins of the money they obtained due to close ties with Putin.

Countries with inadequate AML/CFT measures offer great investment opportunities to money launderers due to the absence of AML screening measures. As a result, businesses operating in these high-risk jurisdictions face the problem of establishing trust among their legitimate customers. Businesses are then forced to take preventive steps to avoid becoming the source of financial crime like money laundering and terrorist financing.

Countries that do not adhere to international regulations are subject to increased monitoring and are added to FATF’s lists of high-risk jurisdictions. The first list is the FATF grey list, which includes the countries that need to make improvements in their AML regime. The global watchdog also maintains the lists of High-Risk Jurisdictions Subject to a Call for Action and Jurisdictions under Increased Monitoring that are updated three times a year.

The FATF also issues tasks and guidelines to these countries to work on mitigating the shortcomings that make them high-risk jurisdictions. The EU and the US have already made efforts to comply with FATF standards and established their own lists of high-risk countries. However, these lists have been created with the same criteria as the FATF’s grey list and black list.

The EU’s AMLD classifies high-risk countries into four categories, which include countries that don’t have AML/CFT systems at all, countries that experience corruption, countries facing sanctions or having terrorist organizations within their boundaries. Regulated financial institutions in each country are advised to adopt a risk-based approach based on the criteria given by the FATF.

The FATF maintains a grey list, also known as the list of Jurisdictions Under Increased Monitoring, and a blacklist, which lists countries subject to a Call for Action. Countries on the FATF’s grey list pose a greater risk of money laundering and terrorism financing. However, these countries have shown commitment to addressing the risks and working towards improving their AML/CFT systems.

FATF’s blacklist includes countries that are identified to be highly risky in terms of money laundering and terrorism financing. For businesses operating within these countries, or those taking services from companies based in these countries, the FATF calls for the implementation of Enhanced Due Diligence (EDD) measures.

In cases where money laundering cases are a serious issue, authorities urge the blacklisted countries to implement robust AML compliance measures to prevent the global financial landscape from facing the risks of financial crime. FATF’s blacklist currently has only two countries: North Korea, and Iran, and the list has remained unchanged since 2020.

The story is not the same for countries placed on the FATF’s grey list, as they constantly become part of the headlines. When the global watchdog places a country on the grey list, it means that the country needs to work on its strategies to combat money laundering. When the FATF sees that a country placed on the grey list is making significant progress, it doesn’t impose sanctions and even removes them from the list in case all conditions are met.

Countries placed on the grey list do face sanctions when they lack adequate measures to counter financial crimes, including sanctions from the International Monetary Fund (IMF) and the World Bank. Once a country is sanctioned by these authorities, it means that no external business entity would want to carry out trade with it, leading to a badly affected economy. Regulated financial institutions like banks need to incorporate measures to avoid being fined by local regulators that keep an eye on their operations.

Local banks and other regulated financial institutions in countries under increased monitoring are obliged to comply with international AML/CFT standards. They are required to detect the risks of money laundering through a risk-based approach and report suspicious activities to the relevant authorities. Customer due diligence is a mandatory process in which businesses need to verify the identities of their customers and perform AML screening to identify suspicious trends in transactions. In case of high-risk jurisdictions, or dealing with businesses based in grey-listed countries, businesses need to implement Enhanced Due Diligence procedures. EDD allows financial firms to determine the risks coming from external entities such as third-parties and politically exposed persons

Every financial institution as well as non-financial firm needs to take effective steps to determine and assess money launder and terrorist financing risks, including potential customers like politically exposed persons, and high-risk jurisdictions. However, the following are some crucial points that businesses need to keep in mind before making ties with companies operating in high-risk third countries.

While it’s not always true that customers from high-risk jurisdictions are part of financial crime schemes or are involved in criminal proceedings, but indicates a greater risk that requires rigid verification protocols. Therefore, businesses need to be more vigilant in assessing the risk factors associated with suspicious clients from countries enlisted in global financial crimes sanction lists.

However, while there are heaps of regulatory obligations for businesses that intend to make ties with customers in high-risk third countries, yet, enhanced due diligence is the most important part of the verification process.

To do so, companies need to go the extra mile and incorporate Shufti Pro’s robust AML Screening solution, which helps them determine the source of income and authenticate transactions before they are made. In this way, businesses can be sure that money launderers and terrorist financing groups get caught before they make any suspicious moves.

Want to learn more about our AML Screening solution for your business?