How Biometric Technology is Shaping Up for 2020 | Shufti Pro 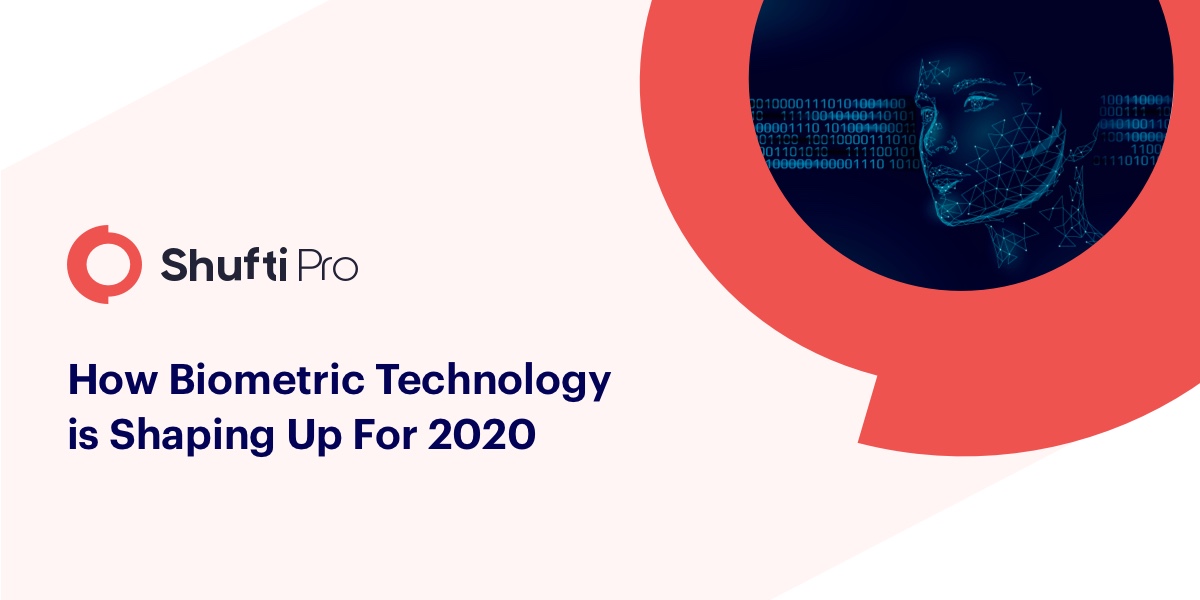 How Biometric Technology is Shaping Up for 2020

The verification of individuals for security measures has become remarkably important for organizations across all sectors. It’s not only imperative for financial institutions, banks, and law enforcement agencies to employ robust authentication systems but also for educational institutes, small businesses, and online retailers. The heightened threats of identity thefts, frauds, and online scams make greater security measures a necessity.

One of the most appealing features of biometrics technology as a security measure is its simplicity. Biometrics employs the use of individual biometric traits. The most commonly used biometric authentication tool is fingerprint followed by facial recognition. Other forms of biometric modalities include facial verification, retina scans, voice recognition, finger vein IDs, etc.

Biometrics has advanced to much prominence, especially in the last few years. In a 2015 report by Juniper Research, more than 770 million biometric authentication applications will be downloaded each year by 2019. In 2018, the global biometrics market accounted for $14.6 billion. It is expected to grow at a CAGR of 16.2% over the years of 2019-2027.

The concept of biometrics can be traced as far back as 31,000 years ago when men were leaving handprints as signatures next to their cave painting. This system went through a number of changes and by 1903, New York prisons were utilizing fingerprints of inmates to keep track of offenders. But it’s only been in the recent past that biometric technology has gone under striking evolution to become what we see today. The integration of biometrics in smartphones expanded rapidly in 2013 when Apple introduced the fingerprint sensor on its iPhone X’s home button.

A number of businesses these days employ the use of biometrics. Healthcare, banking, financial services, digital currency, telecom, aviation are some of the businesses that have to incorporate customer identification. These businesses have exercised biometrics to protect their processes and remarkably increase their efficiency. The average identification time using a biometric system typically varies between 3 to 5 seconds.

According to a poll by Spiceworks, 90% of businesses will be using biometrics by 2020. The biometrics market is expected to reach a value of $24.44 billion by 2020, according to a report by MarketsandMarkets. This significant rise in biometrics begs the question of the future of biometrics.

Let’s take an in-depth look at how biometrics will be all the rage in 2020.

Financial institutions and banks fall under immense constraints to verify the identity of their clients and have robust identification systems. Being the guardians of some of the most sensitive data, banks have to be at the forefront of biometric authentication.

According to a Goode Intelligence report, biometrics will be the primary means of identity authentication utilized by banks and financial institutions.

Multimodal biometric systems will continue to gain more traction in 2020 with the increased development in the biometric sector.

When it comes to biometrics and their application, most people limit it to fingerprint scans or facial recognition. Fingerprint modality is a huge market and is one of the most used biometrics. Biometrics is a vast field and through every passing day, its needs are escalating. In a 2017 report, it was noted that fingerprint modality will grow to an exceptional $11 billion in Banking and Financial Services by 2020 securing about $5.6 trillion payments. It becomes imperative to include newer means of biometrics for identity screening.

The year 2020 will see other means of biometrics-based security systems. According to FCW, other biometrics methods will be joined alongside fingerprint and facial recognition. These different methods include measuring respiration and pulse or identifying veins in a finger. Cognitive vetting is also being explored like evaluating reactions to certain stimuli. These methods may very well prove to be more secure and reliable as compared to the present ones. But it is crucial to note that with more developments in the biometric industry, privacy questions will be raised as well.

It was not that long ago when digital biometrics was only a myth seen in sci-fi movies. In the last few years, biometrics has become remarkably mainstream, especially in smartphones. In 2016, 750 million smartphones which employed biometrics were in use, representing 30% of the global smartphone installed base. According to a report, by 2020, 100% of the smartphones in use will incorporate biometrics.

Supplementary to that, more than 800 million smartphone transactions employing biometrics will be completed by 2020, generating close of $7 billion in annual biometric authentication revenue. Facial recognition for smartphones is going to gain a lot of traction as well. In 2020, 64% of smartphones shipped worldwide will have facial recognition technology. This percentage is up from just 23% last year, according to a report from Counterpoint Technology Market Research.

Biometrics is a growing industry and when used correctly, it has provided an accurate set of data. Through the use of biometrics technology, users don’t have to go through the mundane processes of building complex passwords and remembering them. Biometrics provides a transparent way of identity verification and user accountability.

Despite being secure, there are some privacy concerns attached to biometrics technology. There are issues that revolve around the safety of data collected and stored by retailers as well. Due to these privacy concerns, regulations regarding the use and collection of data are also being considered. In spite of this, the year 2020 will bring remarkable advancements in the biometrics industry.