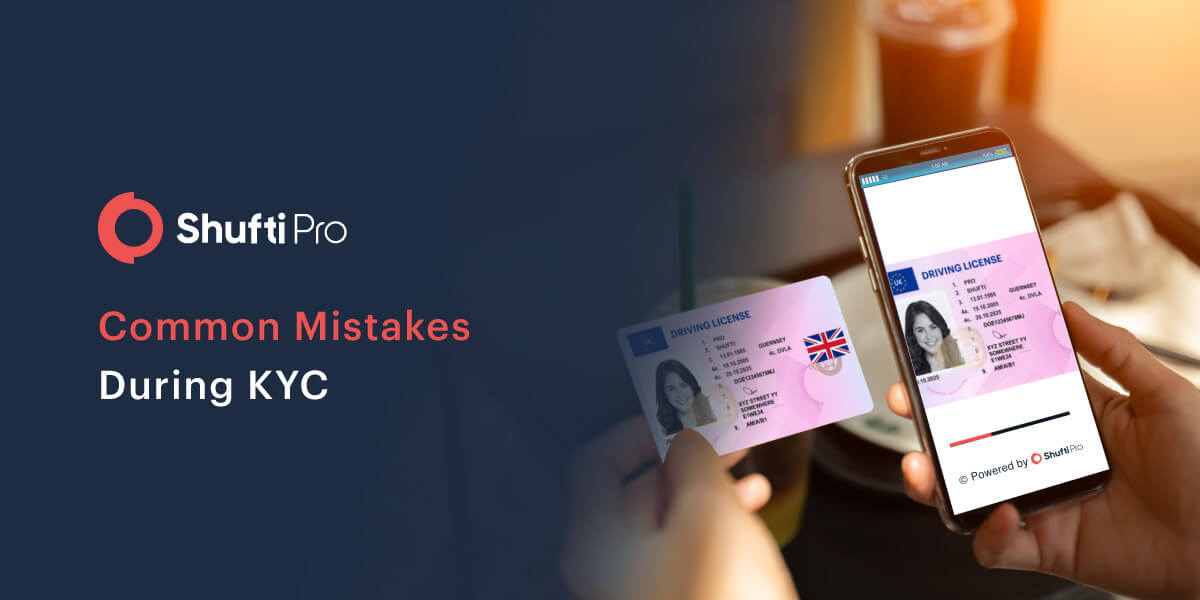 KYC identity verification is one big challenge for end-users. Your customers might be making a lot of mistakes during the process and a little hassle can increase the abandonment rate. Not so much of good news for the company. Well, we know how bad it can be when customers do not understand your process and leave a bad review. KYC may be a cumbersome process for many, Shufti Pro ensures the easiest yet robust process. Over the years, we have encountered many problems and various reasons for declined verification. To make sure end-users do not commit the same mistake, here is a brief overview of the general mistakes end-users commit during KYC.

KYC or Know Your Customer is an identity verification system that allows businesses to verify the identities of their customers. This allows legitimate customer onboarding and effective compliance with the customer due diligence protocols. Previously, traditional methods were used for the job but thanks to digital advancements, KYC verifies individuals in real-time.

Thanks to Shufti Pro’s synergised efforts of Human and Artificial Intelligence, our KYC experts have shared the top 11 mistakes that have repeatedly declined verification of many end-users.

Blurry Photos of the ID Document

The most common of all is shaky or blurry images of ID documents. Consumers fail to upload clear pictures of the required government-issued ID document. Ultimately, our system cannot verify the identity.

Photoshopped Images of the ID Document

To enhance the quality of the image, customers edit the image and our system does not accept photoshopped images. The authenticity checks will identify it as a tampered identity document and onboarding will fail.

Shufti Pro’s KYC identity verification accepts photos of original government-issued ID documents. Scanned images are not acceptable and end-users frequently commit this mistake. Ultimately, their verification is declined leading to the loss of a customer for the company.

Merchants get the option of choosing the ID document type. In case the end-user does not submit the same identity document of client’s choice, the verification is unsuccessful. For instance, if the merchant (our client) has opted for a driver’s license for identity verification and the customer uploads a passport, the verification will decline.

Address on ID Document and Proof of Address Do Not Match

Pictures uploaded for face verification must be clear and distorted images are one of the biggest mistakes that result in declined verifications. This attempt is generally considered as a spoof attack.

In the selfie world, people prefer filtered images over their natural self. However, these attempts result in negative identity verification results. Our face verification system does not accept any filters, masks, glasses, etc. The picture has to be clear and original for face verification.

Face is not Clear in the Selfie

Apart from all other issues, this is the most common problem during face verification. Failure to provide a clear selfie is the major reason behind the majority of failed face verifications. For face verification with Shufti Pro, the selfie must be clear so that all the AI-powered checks can be performed.

Picture on the ID Document and Selfie Don’t Match

Face verification is an integral part of identity verification. As per our method, the consumer has to submit a selfie during the verification. Previously captured photos, cropped images, pictures with filters, and any other edited version of pictures is not acceptable. The selfie is matched with the picture on the government-issued ID document. In case of a mismatch for whatsoever reason, verification results are unfavourable.

How Does Shufti Pro Avoid All These Issues?

End-users have a lot of ambiguity when it comes to performing KYC verification. Uploading scanned or photoshopped images, wrong document type for identity verification, expired documents, and distorted images are some of the common mistakes our team has encountered over time. Sadly, these errors result in declined identity verification. From providing AI-powered instructions to 24/7 customer support, Shufti Pro makes sure the end-user performs KYC in the most effective way possible.

Have more questions about KYC? Get in touch with our customer support team and share all your concerns right away!