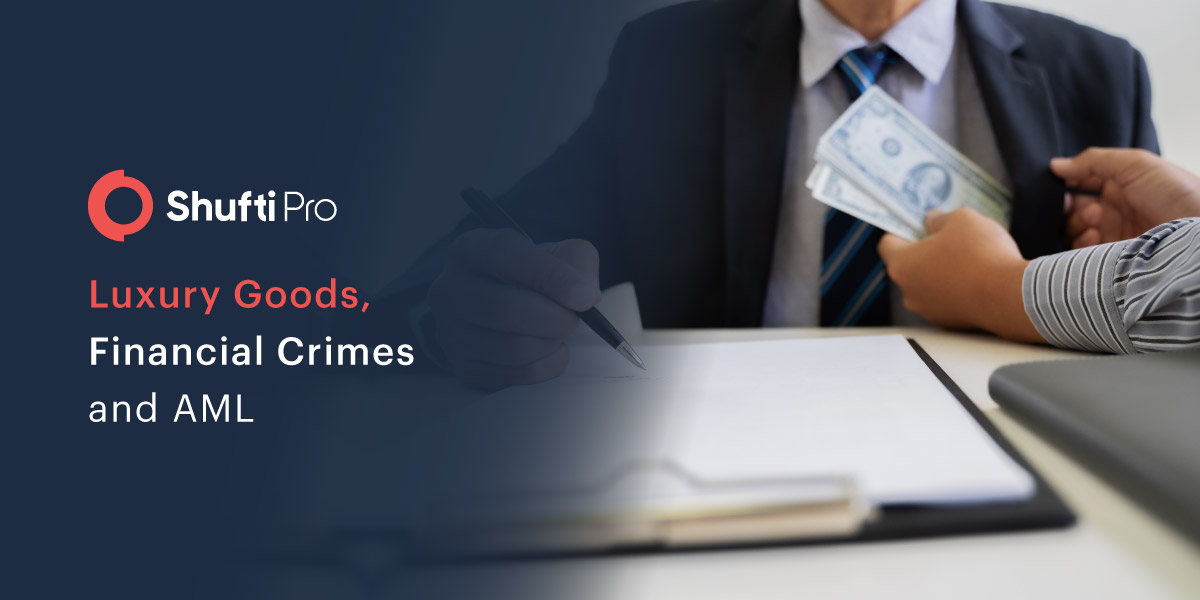 Exotic cars, designer clothes, artifacts, and private jets make attractive news headlines and movie scenes when it comes to luxury goods and financial crimes. However, they are although not always appear at the end-point or integral part of a money-laundering operation which is integration, in which the black money is placed into the legal financial systems, particularly banks, whether it originates through offshore accounts or any other means. In addition to this, money launderers instead of integrating illicit funds into legit businesses or stocks, go for high-value goods such as jewelry, cars, or yachts as they are viable resting places for their funds as well as help them to stay safe from getting onto regulatory radars.

Due to this reason, the luxury goods industry is now becoming subject to anti-money laundering and counter-terrorist financing regulation. The global regulatory authorities are trying their best to legislate strict laws to curb money laundering and other financial crimes, as millions and billions of dollars are wasted each year, which make up around 2-5% of global GDP. thus resulting in impacting the world economy.

China, France, Germany, Italy, Japan, the United Kingdom, and the United States of America are among the nations that run the world’s biggest luxury market generating trillions of dollars each year. However, according to the recent reports of Europol’s financial intelligence authority “From suspicion to action: converting financial intelligence into greater operational impact.” In it, the pan-European agency said: “Banks…are the source of the majority of suspicious transaction reports sent to the financial intelligence units. Certain sectors are noted for their low levels of reporting, in particular high-value goods dealers.” Yet, Europol has ranked luxury goods dealers as the least frequent reporting category of “designated non-financial business.

Brazil’s law enforcement authorities conducted an “operation car wash”, in which suspects of money laundering through luxury goods were uncovered. The Petrobras scandal, named after the state-run oil company that became the target of a money-laundering probe, has led investigators to raid the homes of various deputies, senators, and government officials. At various residences in Brasilia and Sao Paulo, the law enforcement authorities found luxury cars and money. In addition to this, an additional raid was also conducted on the former president Fernando Collor de Mello’s home, in which a Ferrari, a Porsche, and a Lamborghini were recovered as per police investigations.

Other than luxury goods, the fashion sector is also prone to financial crimes. Clothing lines inspired by images of drug cartels like Pablo Escobar appear to symbolize drug trafficking. Due to this reason, now money launderers are using fashion and clothing to wash their black money.

At the end of 2020, around 35 fashion companies were suspected in two schemes, one involved imported clothes in which over $10 million in customs duties was not paid, and the other one, called Black Market Peso Exchange (BMPE) scheme where the business was said to have engaged in money laundering and drug trafficking. The company also didn’t pay a tax return of over $17 million that was obtained in cash.

However, this was not the first time, regulatory bodies have highlighted BMPE to be involved in money laundering and drug trafficking activities. Back in 2014, US law enforcement bodies executed various warrants against BMPE as part of “ Operation Fashion Police” and around $140 million worth of criminal assets were seized.

As luxury goods are widely being used by criminals to wash black money, hence, there is a growing need for unified anti-money laundering and counter-terrorist financing regulations in order to secure the market. Criminals usually invest their illicit funds in real estate, sports or exotic cars, jets, and other expensive items, to remain off the radar. But makes it quite difficult for the law enforcement authorities to determine the source of income. On another hand, stolen assets also make their way to the luxury goods market. Usually, the items are purchased in different jurisdictions from those funds that have been laundered. However, global financial regulatory bodies like FATF, FinCEN, FINTRAC, and various others have come up with strict AML laws to curb the risk of money laundering through luxury goods.

According to the FATF Mutual Evaluation Report or Canada, published in 2016, luxury goods dealers were identified, which included auction houses, exotic cars, art, antiques, etc as highly vulnerable to the potential risk of money laundering and terrorist financing. In 2018, the Standing Committee on Finance of Canada’s House of Commons issued a report ‘Confronting Money Laundering and Terrorist Financing: Moving Canada Forward’, which included 32 recommendations regarding additions and modifications to the country’s money laundering and terrorist financing act. Under this Act, all luxury goods dealers are subject to anti-money laundering regulations in Canada.

The report recommends that “Federal, provincial, and territorial governments should collaborate to close the loophole regarding the transaction of sales between parties who are not subject to PCMLTFA reporting requirements, which creates vulnerability for money laundering to occur.”

In addition to this,  the Canadian government has also been allowed to create a Trade Fraud and Trade-Based Money Laundering Center of Expertise within the Canada Border Services Agency (CBSA), Canada’s customs service. Furthermore, FATF recommendations and the country’s  AML Act mandate luxury goods dealers to incorporate risk-based AML programs, ensure customer due diligence for customers, enhanced due diligence for customers in high-risk jurisdictions along with monitoring and reporting suspicious activities to the financial watchdog, FINTRAC.

The European Union came up with various types of AML directives, aiming to completely eradicate the money laundering and terrorist financing activities across Europe. The Fifth Anti-Money Laundering Directive (5AMLD)  mainly focused on increasing the transparency in transactional operations, whereas, in the Sixth Anti-Money Laundering Directive (6AMLD) regulatory bodies harmonize the approach that EU Member States use to counter money laundering by defining the “predicate offense” associated with money laundering while setting forth minimum sanctions and increasing criminal liability to legal entities.

Under 6AMLD, the entities that are involved in luxury goods dealing and tend to carry out transactions of EUR 10,000 or more, the customers must be verified. However, 6AMLD makes AML screening and Customer Due Diligence (CDD) compulsory for all businesses dealing with luxury items. Furthermore, 6AMLD also contains requirements to enhance the cooperation between the EU Member States to curb the money laundering activities and provide more harsh fines and penalties for AML/CFT failings.

How shufti Pro Can Help

Shufti Pro’s state-of-the-art anti-money laundering screening services are ideal solutions for businesses to stay put with the ever-evolving AML regulation regime while screening customers against 1700+ global financial watchlists with 98.67% accuracy in less than a second.