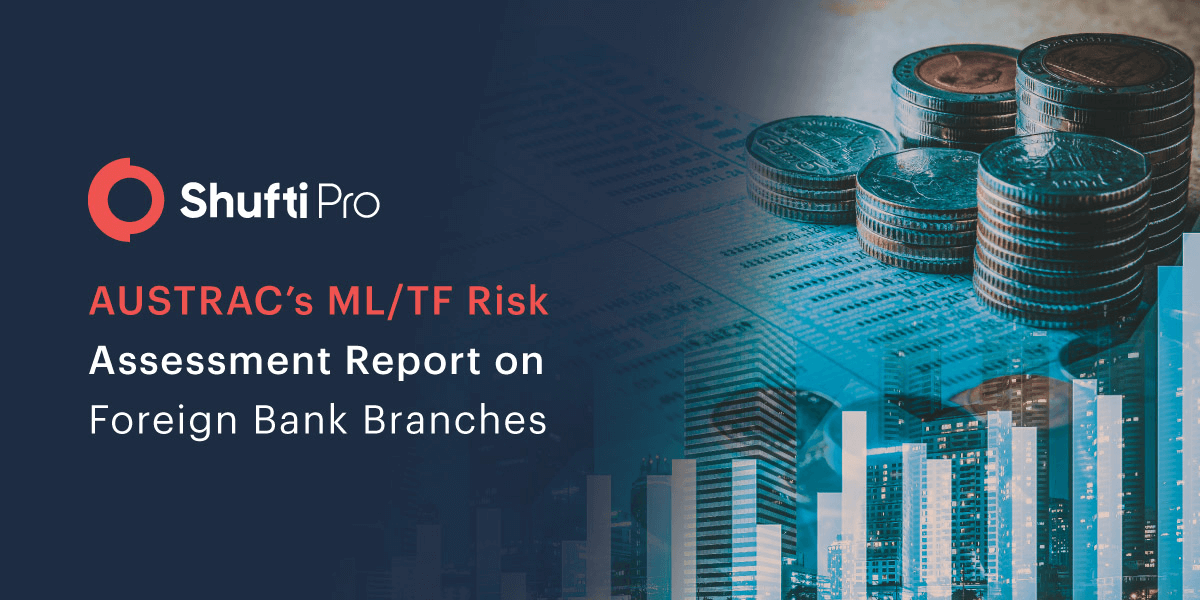 This blog makes the third chapter of our four-part series on AUSTRAC’s report on the Banking Sector, and particularly discusses the ML/TF risks associated with Foreign Bank Branches in Australia.

As of June 2021, 48 foreign bank branches were operating from the counting account for approximately 75,000 customers. The report by AUSTRAC has assessed numerous ML/TF risks targeted at this subsector, some of which include cyber-enabled scams, trade-based money laundering, sanction violations, and corporate corruption. Before we get to that, let’s take a look at what characterizes a foreign bank branch in Australia.

What is a Foreign Bank Branch?

Foreign bank branches operating in Australia are foreign Authorised Deposit-taking Institutions (ADIs) licensed by the Australian Prudential Regulation Authority (APRA). Combined, they hold assets worth $427 billion and provide products and services to corporate and institutional customers, as well as some private banking customers.

Brief Overview of the Financial Crime Environment in Australia

AUSTRAC’s report labelled the criminal threat environment facing foreign bank branches in Australia as complex. This is because while the level of ML/TF risk associated with such banks is low, countless predicate offence types were detected. This implies that while the reporting entities are not significantly exposed to cross-border criminal groups and terrorist organizations, their customers are facing a bigger threat from banking frauds and cybercrimes, followed by personal tax evasion and money laundering.

The report also states that foreign bank branches are generally exploited during the layering and integration stages of the money laundering process, thus reported cases might be understating the actual threat scenario.

SMRs provide AUSTRAC with the intelligence for creating a holistic picture of criminal activities. Not only does it uncover high priority matters that threaten the integrity of a business, but also leads to further analysis and investigation. During the assessment period, approximately 15% of SMRs cited money laundering and 70% reported potential frauds and scams. Thus, the submission of timely and accurate SMRs is crucial for detecting, deterring and disrupting fraudulent activities.

AUSTRAC assessed that with respect to foreign bank branches in Australia, onshore and offshore suspicious banking arrangements have the highest ML/TF risk associated with them. In particular, such incidents were identified in 40% of money laundering-related SMRs. To encourage foreign bank branches to perform Enhanced Due Diligence (EDD) on suspicious offshore accounts, AUSTRAC has cited a case study whereby a bank undertook an investigation over an SMR. The reporting entity was able to uncover money laundering activities, avoidance of reporting obligations by UBOs and PEPs, and their illegal source of funds.

After the assessment of SMR samples submitted to AUSTRAC, the regulatory body marked Trade-based Money Laundering (TBML) as a low-volume, high-impact threat to the subsector. For example, 2 SMRs were submitted to the authority worth as much as  $475 million. This type of financial crime is targeted at foreign bank branches, as they provide a wide range of trade finance products and cater to a high number of corporate clients.

“Foreign bank branches should continue strengthening systems and controls to identify possible TBML across all products and services, while also remaining alert to risks associated with trade finance” – AUSTRAC

AUSTRAC has identified four key threats to foreign bank branches when it comes to online scams. These include email compromise, phishing scams, false billing, and remote access. The value of all these offences was much higher in this sector compared to other banking sectors. The scams were commonly executed through malware attacks, encrypted and self-destructing messages, and public domain email addresses.

AUSTRAC states that foreign bank branches in Australia could face major consequences due to sanction violations. In one sample SMR, for instance, a shell company was found to be using a foreign bank branch in Australia to transfer funds to another high-risk jurisdiction. To avoid such instances, AUSTRAC states all information related to Ultimate Beneficial Owners (UBOs), their assets and transactional activity must be reported to help them better a company’s AML compliance controls.

As per AUSTRAC, most of the reporting entities have adequate risk mitigation strategies in place, including customer due diligence, customer risk rating tools, and transaction monitoring systems. However, some entities lack technological capabilities and require improvements in SMR reporting systems. To overcome these issues, organizations can invest in AML screening solutions to prevent arising threats from Politically Exposed Persons (PEPs), customers from high-risk jurisdictions, known criminals, and sanctioned entities.

Need to learn more about watchlist screening as an anti-money laundering measure? Talk to our experts!