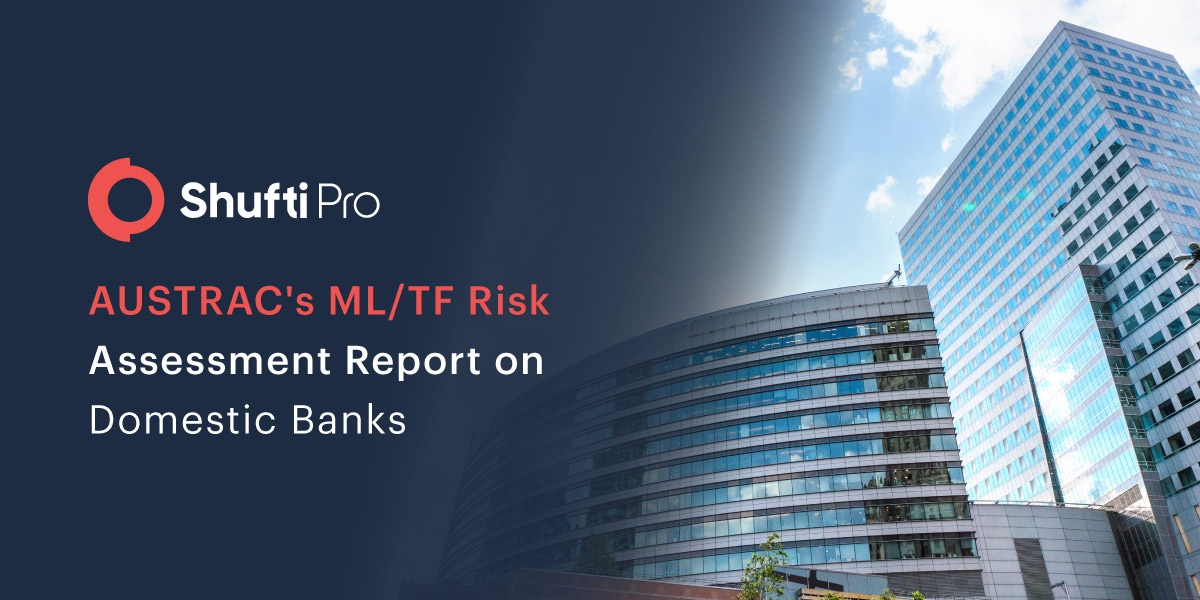 Australia is an important member of the Financial Action Task Force and plays a substantial role in global anti-money laundering (AML) efforts. The federal regulatory and supervisory authority, AUSTRAC – Australian Transaction Reports and Analysis Centre – is at the heart of financial crime detection and mitigation across the country. It works towards the protection of the Australian financial markets and for that purpose, it critically reviews transaction reports, analyses potential ML/TF risks and provides regulated entities mitigation strategies.

This blog is the second chapter of our four-part series on AUSTRAC’s report which highlights the ML/TF risks and crime classification strategies for Australia’s domestic banks other than the “Big Four” including ANZ, Commonwealth, Westpac and National Australia Bank, which we covered earlier in Part 1 of the series.

What are Other Domestic Banks in Australia?

A Quick Look Into the Domestic Banks Landscape

AUSTRAC in its risk assessment report did not include two out of the 12 other domestic banks. This is because APRA (Australian Prudential Regulatory Authority) issued them licences after the 31st of March 2019 which was the last date of the reporting period. That being said, the combined assets of all included banks is a total of $345 billion which is more or less nine per cent of the Australian-owned banking market. While these banks offer a wide array of products and services to the financial, corporate and private sectors, they are recognised as reporting entities as well as licenced ADIs as per the AML/CFT Act.

Under obligations listed in the Act, other domestic banks are directed to develop a functional and effective AML/CFT program, and report the following to AUSTRAC:

Moreover, banks operating in this sub-sector need to submit formal reports regarding the status of their overall AML/CFT compliance. One important thing to note here is that other domestic banks are distinct when it comes to their activities and characteristics because of the nature of customers and the type of products and services This ultimately impacts money laundering and terrorist financing risks associated with different businesses.

Reporting Context for Other Domestic Banks

As a rule of thumb, domestic financial entities need to provide AUSTRAC with suspicious matter reports (SMRs) as part of continuous Enhanced Customer Due Diligence (ECDD) procedures. The regulator, after careful ML/TF risk assessment of the reports, shares feedback with the reporting entities regarding submissions. Here are some interesting statistics about different types of reports transmitted by other domestic banks from April 1, 2018, to March 31, 2019.

The number of total reports submitted and their subsequent related assets shows how crucial they are in law enforcement and AML compliance altogether. When AUSTRAC receives an SMR, it undergoes immediate analysis based on top-tier crime types and other high priority matters including transactions from sanctioned locations or frequent high-value fund transfers. Based on the risk ratings assigned, the reports are sent for further evaluation to analysts and intelligence departments to combat money laundering.

Suspicious Matter Reports or SMRs act as an indicator for possible money laundering and other proceeds of crime but are not concrete evidence for a crime being involved in financial crime. To cater to intricate details, reporting entities are encouraged to include particular information regarding certain threat types. Based on data from numerous transactional activity reports, AUSTRAC compiled 414 different classification labels based on the following:

As per AUSTRAC findings, the overall ML/TF risks associated with other domestic banks are high. The rating is determined taking into account the criminal threat environment (medium risk) which includes money laundering, terrorism financing, and related predicate offences; financial vulnerabilities and subsequent consequences related to the subsector

This label usually consists of identifying money mules, structuring attempts, and suspicious cash deposits. AUSTRAC particularly mentions that delivery channels – identified as a high inherent ML/TF vulnerability – offers anonymity to bad actors allowing them to exploit the systems to carry out financial crime which is hard to detect. Other domestic banks also face the same risks when it comes to agent banking or external product delivery agreements.

AUSTRAC in its report lists products and services that are used by criminals in order to store and propagate black money into or out of domestic banks, namely:

These products and services are used by customers to obscure the money trail across various ADIs in order to integrate ill-obtained money. In this regard, the type of customers and foreign jurisdictions also play a key role.

How can Domestic Banks in Australia Come Through?

Other domestic banks in Australia are regulated entities that need to fulfil reporting and compliance obligations to operate in the financial sector. These requirements are part of the regular Know Your Customer (KYC) and customer onboarding procedures that top-level financial institutions like banks must perform. Shufti Pro’s Automated AML for Businesses solution has got financial entities all covered with its enterprise suite for real-time risk screening for effortless AML compliance.

Are you a bank or financial entity looking for AML compliance tools? Connect with our experts for further assistance.