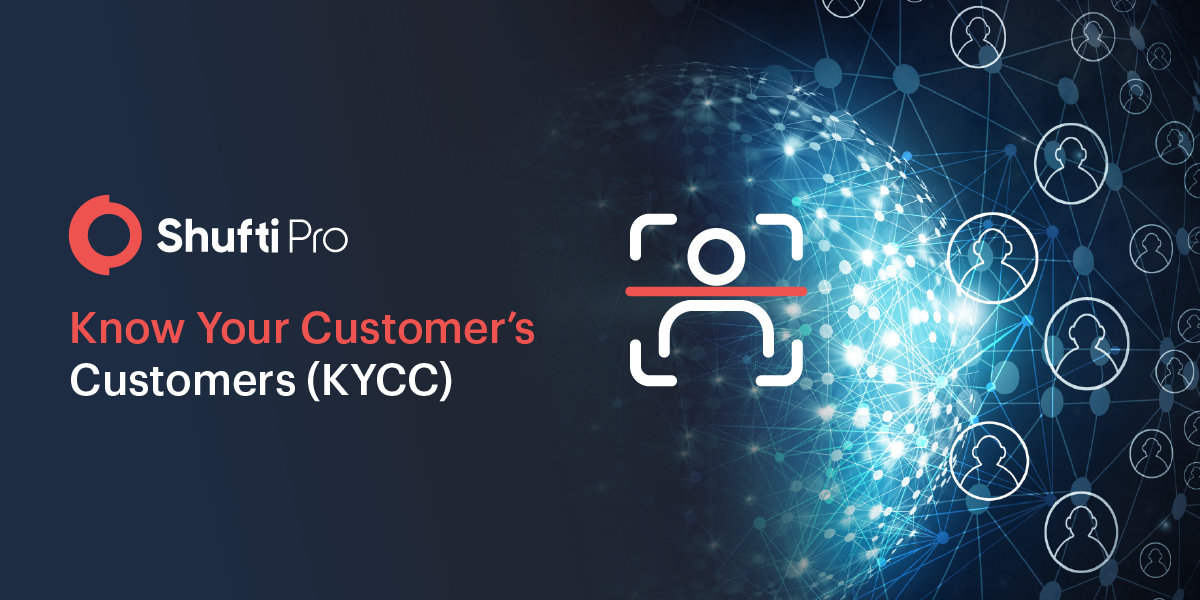 As cases of money laundering and terror financing are increasing globally, the concerns to overcome the gaps in the compliance measures related to identifying and verifying UBOs are rising. Mostly, shell businesses are set up to launder illegally earned money or to carry out other financial crimes. Global financial watchdogs are now deliberately working on establishing and imposing more rigid regulations to prevent fraudulent activities through shell companies.

Know Your Customer’s Customer (KYCC) process provides businesses a way of keeping an eye on their partnering customers, determining their source of income, its authenticity, and the potential threat of financial crimes they may pose to corporate entities.

Know Your Customer’s Customer (KYCC) verifies the identities of Ultimate Beneficial Owners (UBOs) and their source of income. By screening UBO identities against global watchlists, businesses can make sure they are onboarding legitimate shareholders and prevent money laundering and other criminal activities.

The Pandora Papers – The Biggest Ever Leak of Shell Companies Data

The concealed deals and hidden assets of some of the world’s wealthiest and powerful people have been uncovered in the biggest leak of offshore data in history.

Pandora Papers is a  database that holds 11.9 million sensitive files regarding offshore shell companies and trust in tax havens such as Dubai, Monaco, Cayman Islands, and Panama.

The paper exposed the offshore activities of 35 world leaders, consisting of current and former heads of states and prime ministers. 300 other public service officers, from more than 90 countries, were also alleged of having illegal assets.

The pandora papers also uncovered the internal criminal operations of the financial world, providing insight into the hidden patterns of the world’s offshore economy that provides the world’s wealthiest people to invest their funds in shell businesses.

The pandora papers outline the latest and largest in terms of data volume, in a series of leaks of financial data science 2013. Rendering benefits from offshore businesses is not itself illicit, and in many cases, people may have legit reasons, like security, for doing so. The anonymity provided by the tax havens, however, has always proven attractive for money launderers, terrorist financing groups, and tax evaders, some of which have been exposed in the Pandora Papers.

The Panama Papers confirmed that the offshore arrangements exist to provide the people a gateway of doing things they can not do onshore. Whilst entirely legit, offshore assets, shell businesses, and the digital address are being used to hide out the real identities of Ultimate Beneficial Owners (UBOs).

Shell companies being anonymously established in countries having weak KYC and AML regulations are utilized by the criminals to commit various financial crimes, some of them are enlisted below:

These examples clearly illustrate that shell business are a red flag for legit companies. Developing a B2B relationship with such companies will put the clients in real danger and expose them to financial crimes. Due to this reason, the partnering businesses have a significant chance of getting sanctioned from the regulatory bodies, hefty fines, and bans.

Company’s UBOs hold great significance in B2B relationships. Ultimate Beneficial Owners (UBOs) are individuals that control as well as have influence over the company. In most countries, the threshold to be considered a UBO is having at least 25% of businesses ownership.

Laws and regulations regarding UBOs vary from region to region, some of them are listed below:

Shufti Pro’s AI-powered identity verification solution verifies the authenticity of government-issued identity documents in less than a second. With 98.67% accurate identity verification results, businesses can ensure they are getting in touch with the right investors. Furthermore, AI-backed Know Your Business (KYB) verification allows companies to verify partnering firms and their source of income. Backed with AML screening, businesses can ensure that they are not onboarding shell companies and facilitating the flow of illegally earned money through their organization.

Want to know more about UBO verification AML screening? Get in touch with us.