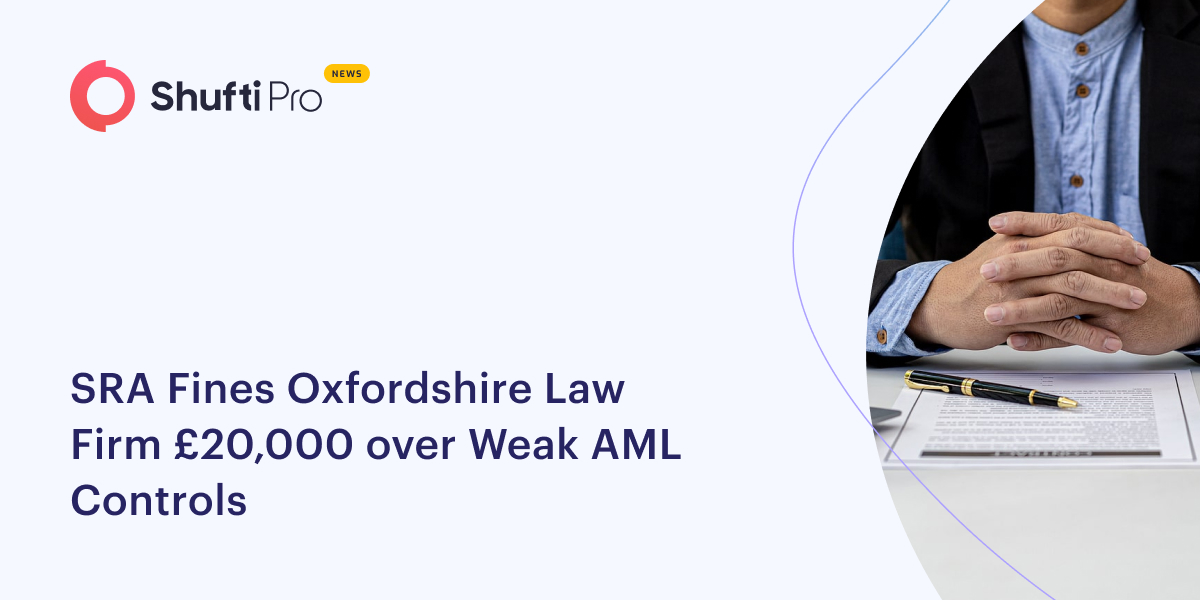 The SRA (Solicitors Regulation Authority) has charged £20,000 to an Oxfordshire law firm after identifying “reckless” failures in AML compliance.

The AML (Anti-Money Laundering) requirements were found incomplete as SRA fined £20,000 to an Oxfordshire law firm. The amount charged is the highest total so far by the regulator since the fining power for law firms has been raised from £2,000 to £25,000 in 2022.

The SRA communicated the lack of compliance “showed an AML control environment failing at the firm”.

In improving the fining authority, Lord Chancellor Dominic Raab expressed that the SRA would be able to levy fines for a more expansive scope of crimes, including “failure to implement the appropriate checks required to uncover signs of money laundering by clients”.

In an agreed consequence published, the SRA said that the AML policy provided by Oxfordshire firm Ferguson Bricknell at the start of its investigation “was updated and did not state the author of the policy.”

Having not been “regularly updated and/or maintained”, the policy referred to “outdated legislation, the MLRs 2007, throughout (the previous superseded iteration of the regulations) as opposed to the current MLRs 2017”.

Ferguson Bricknell, as per the Law society records, has two partners, one disclosed in 1974 and the other in 1979.

The SRA said one of the partners, “was not aware that the policy existed”, which “itself demonstrates a lack of adequate training practices at the firm.”

Another partner, “had not received any AML training on the MLRs 2017.”

The SRA revealed that the only AML activity workers got was a “personal compliance booklet” on AML sent to them in January 2022. It was dated 2016/2017 and listed as “outdated and superseded MLRs 2007.”

The company “incorrectly made a declaration” to the regulatory authority in Jan 2020, that its firm-wide risk assessment was compliant with the most delinquent MLRs following the relevant direction. This was despite the SRA’s two alert notices in 2019.

The regulation authority revealed that the conveyancing risks, which accounted for almost 75% of the law firm’s income, “should have been addressed on the firm-wide risk assessment but had been omitted”.

The SRA described the misconduct as “showed a disregard for statutory and regulatory obligations and had the potential to cause harm by facilitating dubious transactions that could have led to money laundering (and/or terrorist financing).”