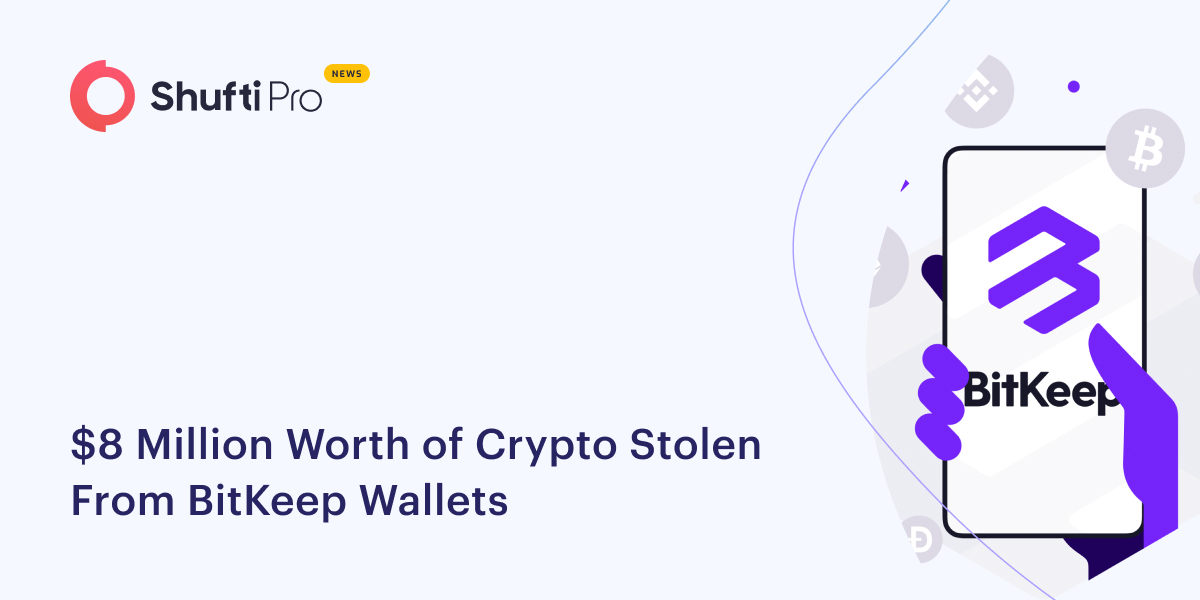 $8 Million Worth of Crypto Stolen From BitKeep Wallets

Cryptocurrencies worth $8 Million, including Binance Coin, Tether, Dai, and Ether, were stolen from BitKeep wallets in an alleged cyberattack and the latest exploit to hit a decentralised finance network

Hackers have hijacked over $8 million worth of cryptocurrency from BitKeep wallets in an apparent cyber attack, the latest to hit a decentralised finance network.

BitKeep users reported through social media that their funds were transferred without any activity from their end, reported by Cointelegraph on Monday, 26th December 2022.

The amount could be higher as transfers were still being made at the time of the report, and it is also wondering whether the breach was from a single attack or multiple.

The number of people affected by the cyberattack is not yet determined. BitKeep, the Singapore-based firm, claims to possess over 6.3 million users.

Among the stolen crypto assets were Binance coin, Ether, Tether, and Dai. BitKeep reported that the wallet of one suspected hacker now contains $5 Million. An account holder used the wallet to store cryptocurrency securely.

In a telegram post, BitKeep confirmed the breach after a “preliminary investigation.”

“It is suspected that some APK package downloads have been hijacked by hackers and installed with code implanted by hackers,” it said, referring to the Android package kit, the file format used on Google’s mobile OS.

“If your funds are stolen, the application you download or update may be an unknown version [unofficial release version] hijacked.”

DeFi, or Decentralised finance, is blockchain-based technology and is regarded as a safer way of performing transactions. It could replace intermediaries, such as brokers and banks, in the financial system.

However, DeFi is attracting more criminal activity with the growing blockchain scale. Many tracked cryptocurrencies yielded total transactions worth $15.8 trillion last year, up almost sevenfold from 2020.

Money laundering, market manipulation, and online theft have been identified as the most significant global threat to decentralised finance on Web3, claims Chainalysis.

According to the New York-based blockchain platform, Crypto-based crimes crossed their highest level last year, with illegal addresses receiving $14 billion in 2021, i.e., almost double the amount of $7.8 billion recorded in 2020.

Over $600 million was stolen from Ronin Network, a play-to-earn game Axie Infinity side chain. Several android package kits can be downloaded on smartphones. As they are not available on Google Play Store, the kits carry serious security risks, including viruses and malware for stealing sensitive user data.

BitKeep urged the users – particularly those using APK versions of their wallets to transfer their funds to its application from Apple’s AppStore or Google Play and create new wallet addresses to safeguard their digital holdings.

The firm also provided an online form to report illegal activity and stated that it would “figure out the solution and assist as soon as possible.”

BitKeep service is active in 168 countries, with $500 billion worth of transactions as listed on the website.