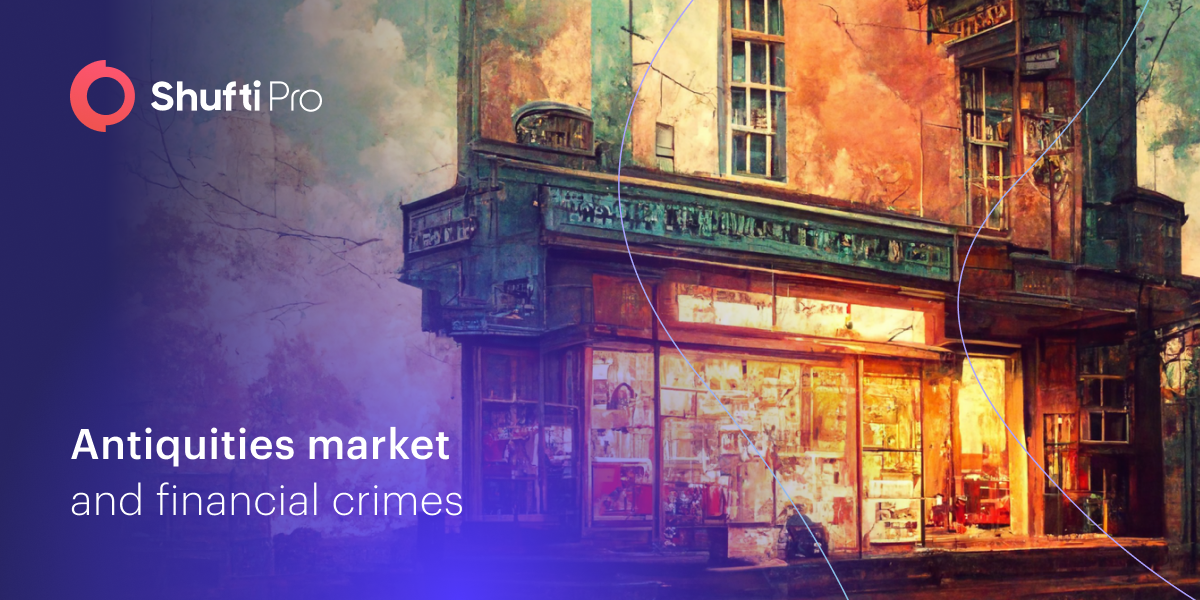 There is no doubt in the fact that art and antiquities are one of the sectors responsible for billions of dollars worth of trade throughout the world. Especially the transforming technologies have altogether changed this industry and now interested buyers make these expensive purchases online. Due to the influx of money in the art sector, criminals have found attractive opportunities for carrying out money laundering and other financial crimes, making it a highly vulnerable industry. It is worth noting that most institutions, particularly banks, insurance companies, and healthcare, have implemented strict Anti-Money Laundering (AML) measures, due to which criminals have been compelled to find alternative ways, like the art industry.

It is estimated that sales in the art & antiquities sector increased by 29% in 2021 as compared to the previous year. Business tycoons and corrupt politicians are usually involved in these expensive purchases to disguise their original wealth. The Financial Action Task Force (FATF), a Paris-based global regulatory authority working against money laundering, has termed the art sector to be highly vulnerable to fraudulent activities and encouraged member-states to find solutions against this menace.

Art and Antiquities Sector – An Overview of Financial Crimes

With the developments in the archeology department, geological scientists are getting access to ancient artworks, and wealthy people across the globe buy these cultural objects. Due to the high prices of antique items, money launderers have found an attractive opportunity to hide their illicit gains through expensive purchases. Due to a weak screening structure, they get successful in getting artwork without declaring their source of income and further selling it to other buyers to get legal cash. Loan scheme is another popular method by which buyers convince banks to approve their loans for making high-value purchases, and through this technique, they successfully launder their black money.

The countries with a rich history, particularly the USA, UK, Egypt, Afghanistan, Libya and Iraq, have high crime percentages. In the recent past, several cases have been witnessed in these countries where criminals tried to steal expensive artifacts and export them to other countries while getting involved in terrorist financing and money laundering. Considering all these prevalent crimes, global financial regulators have termed the art sector to be highly vulnerable to monetary crimes and suggested all the major jurisdictions regularize this industry, countering the criminals.

Artworks usually sell for amounts as large as 10 to 20 million dollars which is far more than several luxury items. Moreover, this industry has no strict laws that encourage criminals to make purchases without paying any tax and reveal their source of income. In this way, they successfully transfer their illicit money to other countries while making them legal assets.

Let’s have a look at some of the high-profile cases in the art and antiquities sector:

World Customs Organization (WCO), Europol, and Interpol conducted a major operation against the perpetrators of money laundering in the art industry. The authorities conducted a raid in 28 countries which led to the arrest of 52 criminals and the seizure of 9,498 cultural artifacts. The authorities have revealed that the culprits were involved in investing drug money into the art sector and further smuggling the items to other countries. Police have said in their statement that 170 different investigations are going on to uncover all the financial transactions related to the case.

Egypt is one of the countries with a history of thousands of years, and many ancient sites and tombs of old Kings, along with mummies and coins, have been discovered here. This is why money launderers are quite active here, and many cases related to the illegal sale/purchase of antiquities originate from Egypt. A gang of eight criminals has been arrested this year and has been found involved in the unlawful excavation in several archeology sites. Police have confiscated a large number of digging tools from the criminals and started interrogating them. The authorities have confirmed that all the individuals were involved in money laundering for which the investigations are going on to trace the transactions.

In the wake of rising crime in the art and antiquities sector, all the global financial watchdogs have raised their concern while instructing the member-states to adopt a comprehensive approach to countering criminals. FATF, Interpol, and European Union are the top regulators which have shown a strict stance towards prevailing money laundering in the art industry, due to which several countries are regularizing this sector.

Let’s have a look at the role of FATF and EU in implementing AML measures in the art industry:

The Financial Action Task Force (FATF) has termed the art sector highly vulnerable to financial crimes, particularly money laundering and terrorist financing. FATF has issued detailed guidelines proposing a comprehensive framework for all the member-states to implement against the increasing scams in the artifact industry. FATF has also termed Egypt, USA, and Iraq to be the hotspots of such activities and asked the local governments to implement robust AML solutions efficient enough to authenticate the criminals.

The 6th Anti-Money Laundering Directive (AMLD) by the European Union has made it mandatory for all member-states to regulate the art sector and let the authorities know in case of any suspicious activity. All the stakeholders need to report any transaction exceeding EUR10,000 to law enforcement agencies. Moreover, the 6th AMLD has also instructed the art industry to implement Customer Due Diligence (CDD) to verify users’ true identities and keep a record of them.

Money laundering has become a global issue, further leading to a myriad of issues, particularly terrorism. Due to its high-value assets, the art and antiquities sector has provided an attractive platform to criminals. Implementing stringent Anti-Money Laundering (AML) measures solutions is the most viable option for stakeholders to counter financial criminals. The AML solution should be intelligent enough to screen the records of sellers and buyers against the global sanctions lists and report the suspected ones to concerned authorities. Every coming year is witnessing more criminal cases in the art industry, and it is the most feasible time for companies to invest in anti-money laundering solutions.

Combating money laundering and terrorist financing is crucial for transparency in the art and antiquities sector. Due to the involvement of high-value assets, it has become the criminal’s first choice for financial crimes, which should be discouraged through effective screening solutions.

Shufti Pro’s AML screening solution presents an efficient solution for curbing financial crimes in the sector. Shufti Pro’s AML solution is powered by an AI algorithm and has access to 1700+ sanctions lists by global financial watchdogs. While screening data against them, it generates results in seconds with a ~99% accuracy.

Are you ready to explore AML screening solutions for the art and antiquities sector?