A Brief Overview of 2021 AML Trends
Skip to content 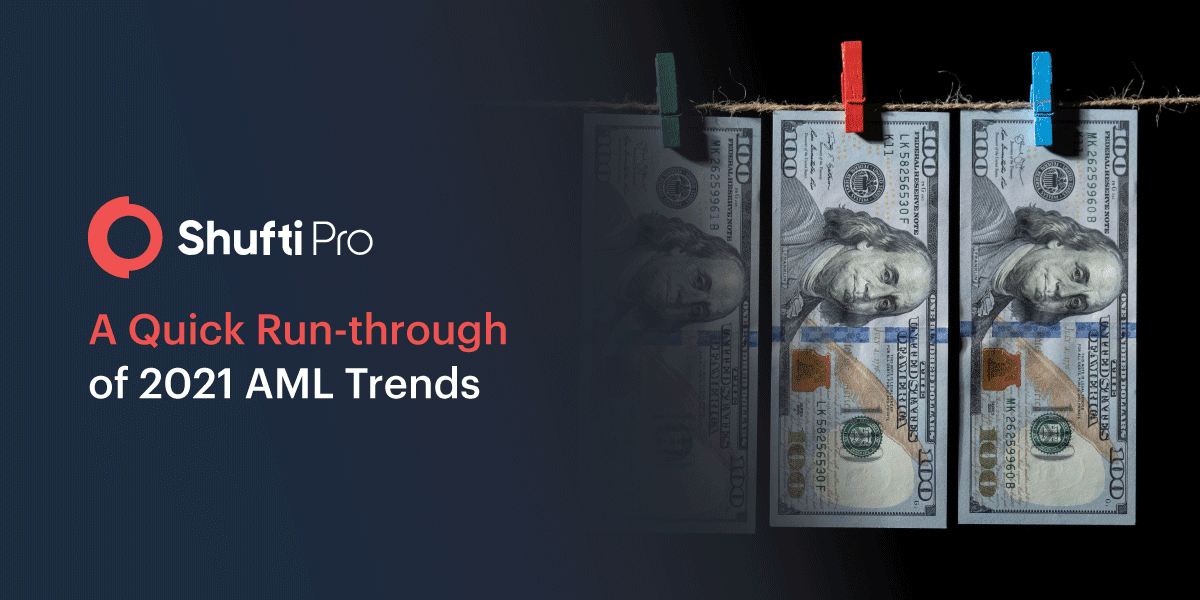 A Brief Overview of 2021 AML Trends

As such, financial institutions can no longer afford to lose focus on the critical responsibility of detecting, preventing, and reporting suspicious activities.  At the same time, institutions are being pushed towards exploring the adoption of robust technologies for keeping pace with fraudsters and money launderers.

Brief Summary of AML Trends in 2021

On January 1, 2021, the Anti-Money Laundering Act of 2020 (AMLA 2020) officially became law, following the US Congress’ vote in favour of the National Defense Authorization Act for Fiscal Year 2021 (NDAA). The new AML law has made some sweeping changes to the Bank Secrecy Act and other AML rules, such as the introduction of new beneficial ownership requirements, the addition of virtual currencies in the AML framework, mandatory Suspicious Activity Reporting (SAR) requirements, and expanded civil penalties for the violators of the AMLA.

Following this move, Dubai set up a specialized court for combating money laundering challenges, while the National Committee for Combatting Money-Laundering and Financing of Terrorism and Illegal Organisations (NAMLCFTC) introduced new regulatory requirements for virtual asset providers in September 2021. Under the new AML framework, all virtual currency providers including cryptocurrencies have been obligated to comply with the FATF’s travel rule.

Singapore is among the few countries that are effectively combating financial crimes such as money laundering and financing terrorism. The country has successfully developed strong AML policies to comply with international AML standards. Additionally, Singapore is also one of the founding members of the Asia/Pacific Group on Money Laundering – the intergovernmental body that ensures the implementation of AML strategies.

In July, the Monetary Authority of Singapore (MAS) proposed to expand the scope of AML requirements. This proposal was made to deter financial crimes taking place in financial institutions that deal with precious stones, metals and products (abbreviated to PSM).

In January, the government of Philippine expanded the scope of the Anti-Money Laundering Act (AMLA), bringing offshore gaming operators, real estate developers and brokers into the AML framework. Later, in February, the country’s central bank revised its AML/CFT risk assessment framework and introduced a four-point rating scale to facilitate companies in evaluating risks and the quality of their anti-money laundering and counter-terrorism financing program.

The Philippines had managed to make adequate progress of strengthening the effectiveness of its AML/CFT regime to be removed from FATF’s grey list in 2017. However, it has been placed in the grey list following the FATF’s “Jurisdictions under Increased Monitoring” report of 2021.

Financial Institutions are Investing in AI for AML Compliance

Traditional mechanisms of ensuring KYC and AML compliance have proven to be inadequate given today’s robust regulatory landscape. Thus, an increasing number of organizations are moving towards AI and ML-backed technologies. Not only do such technologies allow companies to cut down costs, but it also enhances the due diligence processes necessary for effective fraud prevention.

Based on research by SAS, KPMG and the Association of Certified Anti-Money Laundering Specialists (ACAMS), more than a third of financial institutions deem AI and ML technologies crucial for streamlining AML compliance. Over half (57%) of surveyed respondents stated that they had either already deployed AI/ML into their AML compliance processes, are currently piloting AI solutions, or plan to implement them within the next 12-18 months. According to the survey by SAS, KPMG, and ACAMS, the following two factors have been identified as the primary drivers behind AI and ML adoption:

Regulators Urge the Use of Tech for AML Compliance

The new guidance encouraged the adoption of regtech solutions in the area of customer identity verification and transaction monitoring – a mandatory task performed by banks to comply with AML/CFT regulations.

Additionally, the FATF examined the use of automated technologies in a report published in June, stating that with the fusion of a risk-based approach and innovative technologies, financial inclusion can be promoted. Other benefits of using automated technologies for AML compliance highlighted by the FATF include secure payments and transactions, enhanced due diligence on high-risk entities, and ongoing transaction monitoring.

“They can help financial institutions and supervisors, assess these risks in ways that are more accurate, timely and comprehensive.” – FATF

Trade-based Money Laundering on the Rise

Trade-based money laundering refers to the process of moving funds through trade transactions in an attempt to disguise its source and reintroduce the money into the legal financial system. The FATF’s president, Marcus Pleyer, declared trade-based money laundering a new kind of fraud that enabled criminal organizations to launder over $400 million in recent years.  In March, the Financial Action Task Force (FATF) and Egmont group published a new report on risk-indicators of Trade-based Money Laundering. The report was issued to assist the private and public sector in recognizing suspicious activities that occur in overseas trade.

Additionally, research published in the latest “Journal of Money Laundering Control” states that in the post-Brexit landscape, the UK is at a high risk of trade-based money laundering owing to a rise in illicit outflows and unpreparedness of enforcement bodies.

To revamp the EU’s AML and CFT regime, the European Commission published a new AML proposal in July 2021. The EU AML draft consists of four legislative proposals that suggest the formation of a new AML authority (AMLA), a single EU rulebook for AML/CFT compliance, imposition of AML/CFT rules on the crypto sector, and the adoption of a 6AMLD which revokes 4AMLD.

These proposals seek to combat the challenges associated with the detection of suspicious activities and transactions, and the shortcomings of AML policies that criminals currently exploit. As stated in the EU’s Security Union Strategy for 2020-2025, enhancing the country’s AML/CFT framework will provide Europeans with better prospects of protecting themselves against terrorism, money laundering, and other organized crimes.

To prevent the misuse of cryptocurrencies for money laundering and terrorism financing, the Financial Action Task Force introduced the Travel Rule in June 2019. However, only 58 out of the 128 reporting jurisdictions had implemented the revised FATF standards by June 2021.

In the first half of 2021, Ireland undertook serious measures to regulate crypto-based firms by mandating all Irish VASPs  (Virtual Asset Service Providers) to register with the country’s Central Bank within a deadline of three months. South Korea’s Financial Intelligence Unit (KoFiu) also imposed similar registration requirements on all crypto providers and stated, “any local crypto platform that fails to comply with the new rule will face an outright ban on operating in South Korea”.

In September, Ukraine officially adopted the Draft Law On Virtual Assets. Prior to that, Cuba passed a law to recognize and regulate cryptocurrencies, while Panama is currently in the planning phase for new cryptocurrency regulations. Other countries that support AML regulations on crypto include the UK, UAE, France, Switzerland, Germany, Netherlands, Thailand, Japan, and Australia.

Despite the rising incidents of money laundering, economies worldwide are implementing strategic programs to effectively minimize associated risks. On one end, regulators are introducing new guidelines to diminish ML/TF threats, while on the other, financial institutions are deploying fully automated technologies to streamline customer risk assessments, ensure continuous transaction monitoring, and screen all clients against global watchlists.

To perform AML screening in real-time with global coverage of PEP, Sanctions, and criminal watchlists, talk to our experts right away!